1 A Single, Complex System for All Your Bike Riding Needs. Meet HAWKeye

5 Rizer: Most Realistic Ascending and Descending Bike Trainer to Hit the Market
Car video reviews:
Up Next

Retro-Looking, Limited-Edition E-Bike Claims to be the World's Lightest, Goes for $22,000

You’re riding along on your bicycle. The sun is nice, no clouds, no rain, just soft and plush tarmac. Suddenly, you stop. Your eyes are averted by a small trail that breaks off from the asphalt, leading unpaved into the wilderness. Sitting there, you look down at your bike, back at the path, and then you ride off knowing the machine you’re riding won’t cut it in the wild.

But you know one bike that may? The titanium wonder known as Cache. The Cache is a bike manufactured by a little-known team as Knolly Bikes, a crew born in the ‘MTB Mecca’ of the world, Vancouver’s north shore and Whistler, British Columbia.

Back in 2003, their first prototype V-tach frame would be finished and presented to the world. Soon after, via word of mouth, production sold out on the frame and Knolly Bikes became an official brand. Years later, and this team is still going strong creating specialized frames that are honed for their respective terrains.

In the case of the Cache, gravel roads and one-tracks are the name of the game. But aside from its ability to handle these types of routes with no problem, there’s also a nice bonus you’ll be getting when you spend the $5,500 (€4,716 at current exchange rates) asking price for this sucker; it constructed using a titanium frame.

That’s right folks, the Cache uses titanium in its tubing. Since titanium is twice as strong as aluminum with nearly half the weight of steel, and the inherent properties of titanium usually yield a bike that can outlive its owners, that alone is worth the cash, in my opinion.

Now, you can just give Knolly a call and pick up a frame, as long you know what you’re doing and have all your corresponding parts already bought and waiting to be thrown on. Or you can just pick up one of the two builds Knolly offers, a Shimano GRX 600 of GRX 810 build.

Like other gravel bikes on the market, standard, you’ll find a solid fork made with carbon and using Knolly’s proprietary layering tech to be shaped. This should be more than enough to handle vibrations and shocks. But, if you just can’t let go of some sort of suspension on your bike, the video below and some images in the gallery do show a Cache equipped with a suspension fork.

If you choose to not add a suspension fork onto your Cache, you’ll always have tires to turn to. Be it you choose the GRX 600 or GRX 810 setup, Knolly will still be providing the same wheels, a Maxxis Ravager EXO on the front, and a Maxxis Rambler EXO on the rear. If you’ve got something else in mind, go for it.

One thing to understand about the Cache is that it’s not just meant to be ridden around for a few hours, but with the inclusion of several mounts, you can turn this bike into one mean bike-packing machine. Pannier mounts on the seat stay and several other mounts in the forward triangle should be more than enough to get you going down that trail you stopped at earlier.

As for the cockpit on this sucker, Easton and Cane Creek make their appearance with handlebar, grip tape, stem, and headset. For braking, Shimano offers the respective GRX line brakes but all with 140 mm (5.5 in) rotors.

Now, revert to the very first part of this story where you’re riding along and can’t venture onto that unbeaten path. How does that change if you’ve got a Cache between your legs? 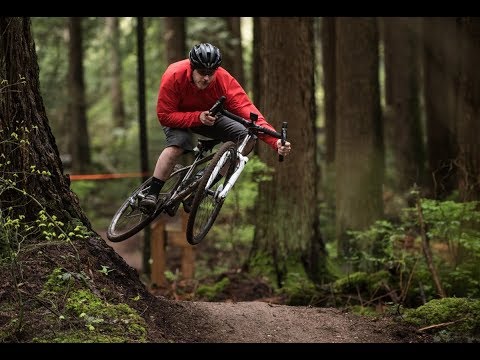