5 Land Rover Takes You on a 21-Day One-of-a-Kind Trip
Car video reviews:
Up Next

Klassen’s 2020 Range Rover SVAutobiography: Ride Like the Prez for $1.3M

For some, a fully customizable, luxury variant of a Range Rover is not enough. For them, the SVAutobiography exists, but it’s been made better, more luxurious and tougher by Klassen.
14 photos

Klassen is a German tuner that makes state cars, and the Klassen 2020 Range Rover SVAutobiography is the most recent example of their decades-long experience and skill. Officially called the Executive Klassen Bunker VR8 Armored, it’s a stretched, armored and ultra-luxurious SUV that is just perfect to make you feel presidential, because it could actually work as an official state car. As luck would have it, it’s for sale.

The Klassen 2020 Range Rover SVAutobiography was recently listed to Mobile.de for an asking price of €1,102,000, which is roughly $1,318,400 at the current rate exchange. It’s not cheap by any means, but we’re talking here about a vehicle that isn’t meant for common folk or the younger generation of social media nouveaux riches.

Everything about this monster of a vehicle screams serious business, understated luxury and ultra-comfort. It has VR8 armored protection (second-to-last level of ballistic protection) throughout and bulletproof tires, with Klassen saying it can take 7.62 mm caliber bullets from a distance of about 10 meters (about 33 feet).

Everything has been upgraded and reinforced to support the added weight, but power still comes from the stock supercharged 5.0-liter V8. The listing notes that the model for sale has 0 miles on the odo – newer than new.

In the back, there’s seating for four in all-leather seats: two captain’s seats with massage function and two extendable seats facing rearward, for unexpected company. There’s a sliding roof so you can greet crowds and address the peasants people, and a trademark Klassen partition that includes a screen for AppleTV. Electrically-deployed writing tables, folding footrests and a variety of other fancy functions render this vehicle just as suitable for work as it is for more informal downtime. Of course, black-out curtains are available on all windows for the utmost privacy.

The vehicle is also equipped with sirens and flashing lights, as well as telescopic flag holders. 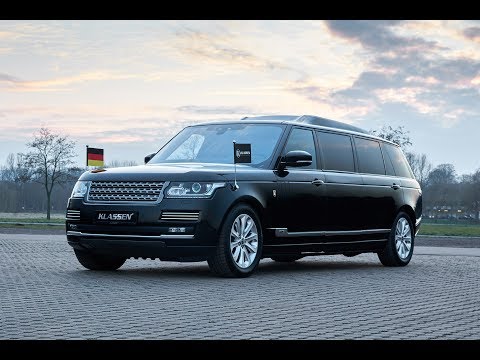