3 Never-Made British Airbreathing Spaceplane Would Have Been a Blast, Animation Proves

After years of being bombarded with news and images about humanity’s space exploration efforts, pretty much all of us have the same mental image of a rocket: long cylinders tied close together, on top of which sits a pointy capsule where the precious cargo, living or otherwise, is stored.
11 photos

But the prevalence of this design doesn’t mean over the years some other concepts haven’t been tried. Back in the early 2000s, for instance, a now-defunct company called Kistler Aerospace was working on something called the K-1.

Officially a two-stage rocket, the K-1 was reusable, as those were the years when this concept really started to take hold. Both the first and second stages used Aerojet engines and were capable of landing as soon as their mission was complete.

With all of the above in mind, the mental image of the K-1 is not all that different from all the other rockets for most of us. But not for Hazegrayart, a specialist who likes to bring to life never-made projects of the aerospace industry.

Revived with the help of animation software, the rocket assembly is entirely different. It has the second stage, the capsule, located smack down in the middle of four spaced boosters arranged in a square, like the posts of a bed – hence the nickname Bedpost rocket given to it.

In the animation, we get to see the rocket lift off an elevated pad, then climb and looking as if four separate rockets fly in sync towards the heavens. When a set altitude is reached, the center capsule separates and starts moving toward orbit, while the bed frame descends and lands. Once the capsule’s mission in orbit is complete, it does the same thing, landing in a separate location from its boosters.

Again, all you see in the video below is just make-believe. In the real world, Kistler Aerospace went bust due to financial issues, and the K-1 joined the growing list of space projects that never got made. 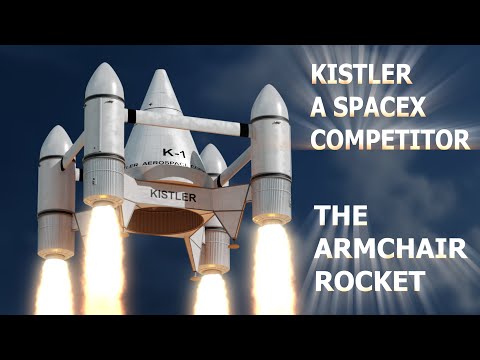