1 Rymic Infinity 3 Aims to Upscale Your Commuting Experience, Is Stylish and Affordable

3 Ride On Forever With the Solar-Powered Mokwheel Basalt: Charges Glamping Devices Too

4 Frey's Beast E-MTB May Be the Strongest and Fastest Around but Will Cost You $7,500 To Own

Let's face it, e-bikes are here to stay. However, most of these trinkets seem to be limited in terms of speed and power. Well, one crew shifting our view of e-bikes is UltraTRX, and the machine they're doing it with is the King E-Cheetah "Super Bike."

Folks, the name UltraTRX has been active in the cycling industry since 2008. While they initially saw their beginnings as a fat-tire bicycle manufacturer, in 2013, they shifted to focusing their attention on e-biking. However, since old habits die hard, this crew continued to create machines designed for AT domination, and yes, the perfect example of how this team like to roll is the King E-Cheetah, a full suspension e-bike with stats that are sure to leave you wanting more.

Okay, just to cut to the chase here, let me point out why this machine is so amazing. This bugger is tuned to crunch out a whopping 15,000 watts of power, with peak output at 18,000 watts. What does this mean for future owners or avid off-roaders? It means a top speed of 87 friggin mph (140 kph)!

And no, that is not road legal! Come to think of it, because it's an e-bike, the only place you can legally ride this bugger is on a closed course or in the wild, where local authorities can't find you. Heck, even if they do, it looks like they'll need a helicopter to keep up with you. If speed isn't your thing, and you're all about that torque, 190 Nm (140 ft-lb) is what you can access.

Hang on a minute, those are stats we're used to seeing on electric motorcycles, let alone e-bikes, so what's the catch? Well, there is none. After all, this bugger is priced at $5,000 (€5,020 at current exchange rates) for a reason, and yes, speed is that reason. But what about range?

Considering that the motor is one hell of an ungodly beast, there has to be enough battery power to ensure you don't run out of juice after just a couple of miles. Well, another reason you're being asked to drop this much on the Cheetah is due to the presence of a Sony/Panasonic 72-volt, 60-amp-hour battery that still allows you to achieve a top range of 80 miles (129 kilometers) under optimum conditions. I'm confused; is this an e-bike we're talking about?

Now, I was extremely intrigued by this point, so I ventured further, exploring more and more of what makes the Cheetah what it is. It's here that I started to understand that the only reason this bugger is considered an e-bike is because it has pedals and a chain. The rest is just one mean off-roading machine.

For example, the frame is built out of steel and includes a KK suspension fork with 150 millimeters (5.9 inches) of travel, adjustable, and equipped with lockout. That rear shock is an UltraTRX component that supports up to 1,000 pounds (453 kilograms) of pressure. Throw on a single-speed drivetrain, tubeless motorcycle tires, and up to 203-millimeter (8-inch) brake rotors, and you're looking at a 98-pound (44-kilogram) hunk of off-roading steel.

If that's not enough to grab your attention, how about an optional solar panel attachment that allows you to charge your battery in up to 7 hours? Oh, and of course, you can add features like cargo bags and or a rear cargo rack, just in case you feel like really riding as far as you want. Why not camp out underneath the stars?

You know, I've covered quite a number of e-bikes since I've been here at autoevolution, and rarely have I read or seen an "e-bike" that can perform like this one. Maybe the Delfast can be considered a rival. And that's just one e-bike out of the hundreds that my visual cortex has processed. I think this one needs some rather strong consideration if you're looking for an e-bike that can keep up with combustion engine motorcycles. 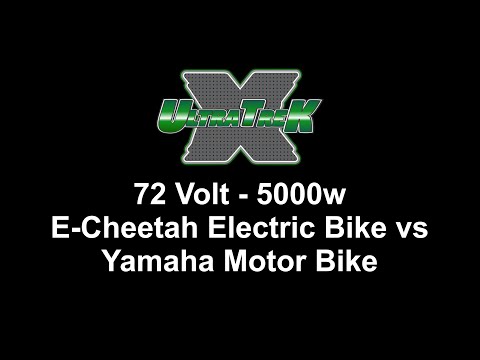