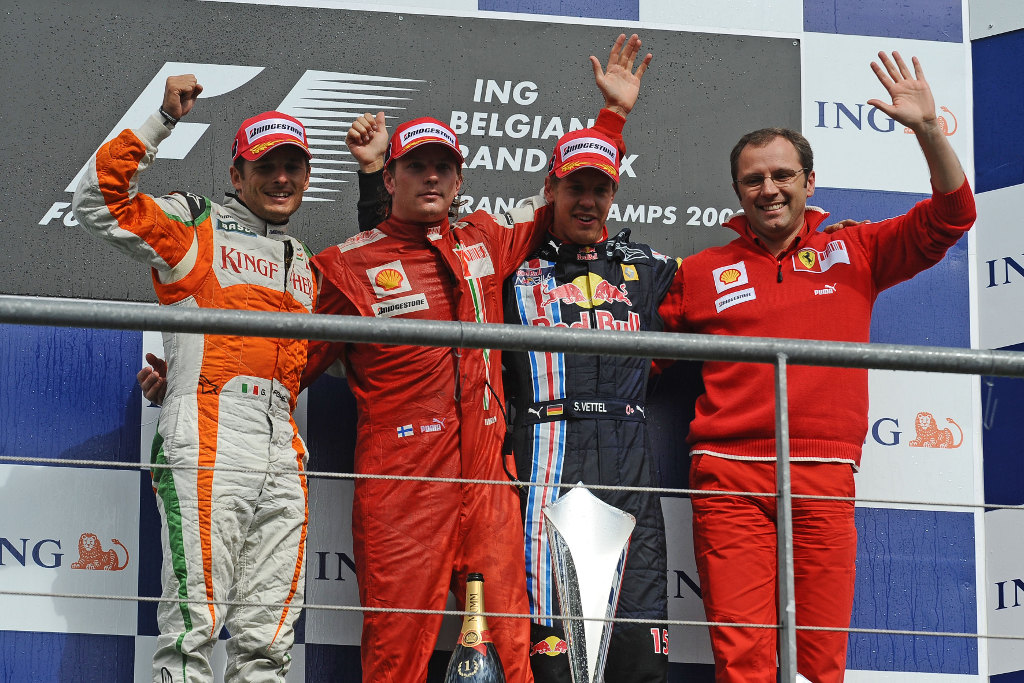 Kimi Raikkonen drove without fault at Spa-Francorchamps to bring Ferrari its first victory of the season. The Finn had a good start and made a very intelligent use of KERS in his battle with Fisichella that lasted throughout the race.

The start saw a bullet-like Raikkonen that made use of his KERS and just managed to avoid a grounded Rubens Barrichello. Closing in on the first right-hander Kimi was forced wide, but bravely kept his foot on the acceleration and re-entered the track 3rd.

At about this point in the race, the fantastic qualifying Trulli touched Heidfeld’s rear tire and was forced to pit and later retire, after a disappointing Sunday run.

A few corners later though, chaos struck. In the Les Combes turn, Grosjean’s Renault pushed Button’s BrawnGP, which in turn did a spin and caused Hamilton and Alerguersuari to crash in an attempt to avoid Button.

That meant the Brit driving for BrawnGP failed to score again in his now stressful effort to secure his championship lead. The safety car entered the track and Kimi was already in second place.

After the safety car retired, Ferrari’s Finn activated his KERS and overtook first placed Fisichella for the triumphant position he maintained until the end. But don’t think this is where the race was over. The most impressive and pleasantly surprising performance was Giancarlo Fisichella’s drive, who threatened Kimi’s first place from start to finish.

Vettel had a strong performance and thanks to a sustained pace managed to clinch Kubica’s third place. The BMWs however, both had a very good race and managed error free pit stops, finishing 4th and 5th.

Vettel’s team-mate, Mark Webber, looked solid too, but during the first pit stop, unsafely exited the pits and almost caused Heidfeld to crash into the pit wall as he desperately tried to avoid a collision with the Australian. The incident was penalized by the stewards with a drive-through penalty for Webber, which dropped him to ninth place.

McLaren's Kovalainen had consistent race, finishing sixth, after driving with a one-stop strategy. Nico Rosberg took the final point up for grabs, finishing 8th after an incident free race.

Big disappointments also came from Renault’s Alonso and Toyota’s Timo Glock. Alonso had a long first stint, but his front-left tire received a slash following a minor contact in the first lap. When he pitted, his team had difficulties taking the wheel off and attaching the new one, which resulted in the Spaniard being called in by his team only a lap later.

Glock’s tenth position was caused by a refueling rig problem, which made him lose valuable seconds.

Nakajima and Badoer both had quiet and underperforming runs at the back of the pack. Here are the results for the drivers who finished the race.