3 VW Wanted to Buy Alfa Romeo And Give It Porsche Power, FCA Said No

5 The Alfa Romeo 155 TS That Gabriele Tarquini Almost Rolled Over Is Up for Grabs
Car video reviews:
Coverstory

Over the past few years, I've had the pleasure of driving several Alfa Romeo cars, including the Giulietta Quadrifoglio and one of the sportier 159s. I've also managed to put in a few laps at the track in a 4C, which felt pretty much like a baby Ferrari 488. And there's some Ferrari DNA in the top of the range Giulias as well.
9 photos

I was excited a few years ago when Alfa Romeo announced the Quadrifoglio version of the Giulia, a sedan that would jump in the ring with cars like the BMW M3 or the Mercedes-AMG C63. With slightly over 500 horsepower and some 443 lb-ft (600 Nm) of torque, the Giulia Quadrifoglio is bound to provide an interesting driving experience, especially because all of that power is sent to the rear wheels.

For anyone who knows anything about Alfa Romeo cars of the past, it only makes sense that the Italian manufacturer came up with the idea of releasing two very special editions of the Giulia: the GTA and the GTAm. Only 500 units will be built all in all, so it's no surprise that their respective price tags are enough to have you considering the more exotic options instead.

And sure, if you're not interested in achieving any kind of collector status and have finite resources, you might as well buy a standard Giulia Quadrifoglio and work your way from there. But that's not the point. The point is that Alfa Romeo has been using its F1 experience to work on these cars, and now the brand brings out its ace driver to have a go in them, showcasing what they can do around the racetrack.

Kimi Raikkonen isn't the most vocal F1 driver out there, but this time he managed to squeeze out a few words regarding the two cars. The test was conducted at the Balocco Proving Ground, a fitting way of seeing what the highest-performing sedan Alfa Romeo has ever built can do. Driving the car Kimi concluded that it could very well be used to take the kids to school and then hit the track for a few hot laps.

Kimi has had a word in the development of the GTA and the GTAm, as he had previously tested the vehicles in 2020, providing important advice and feedback regarding the aerodynamics. Even so, as he engages in a spirited driving session, he does note that a "thicker spoiler" might have been even better for the job. Having driven the previous version as well, Kimi notices that the balance is now better at high speeds and that the steering is also faster. "The car is giving you the confidence to push it," he adds, further praising the GTA.

Sauber Engineering is responsible for producing most of the carbon fiber components on the two high-performance vehicles, including the front bumper, the side skirts, the rear diffuser, the GTA spoiler, and the GTAm aero-wing. The GTAm is on a level of its own, as it creates double the downforce of the GTA and three times the amount of the now regular Giulia Quadrifoglio. And I don't know about you, but it sure is interesting to see the GTAm take on the Nürburgring Nordschleife for a hot lap with Kimi behind the wheel. 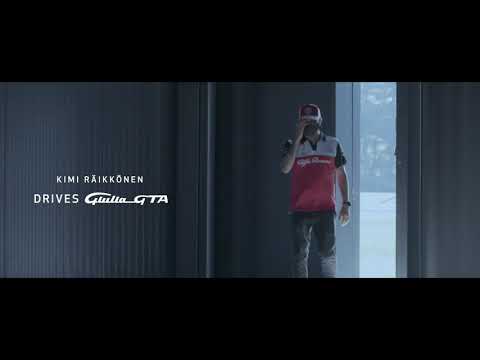