4 Becks Putting his Tricked Bentley Up for Sale
Coverstory

Kim Kardashian's Bentley is Out of the Shop 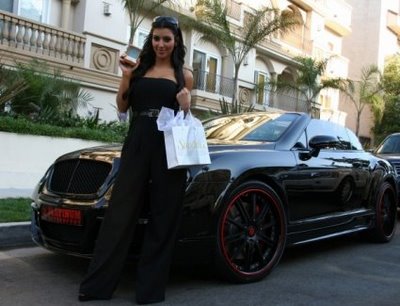 How many of you guys out there have a thing for Kim Kardashian raise your hand. That many? Well, then that number is sure to be on the up and up today after you hear that she's a petrolhead. We still doubt that she'll get dirty working under a car on her day off, but at least she likes cars and that's alright with us.

News on the street today is that she just got her car out of the shop, after that little fender bender a couple of months ago with a motorcycle. That was a cryin' shame too because the Bentley Continental GTC had been on the road just a couple of weeks. And that was AFTER waiting around for 4 months to be customized by the boys at Platinum Motorsports.

When the car was again put in the shop, the damage taken would mean that the GTC would have to spend at least 2 months away from the street. Well, the time is up and it's a bit over 2 months. The main changes are the fact that the car has lost those pink doodles on the side which weren't very ... manly shall we say?

Now the car looks a little more rugged and a little more prestigious with the red rims and the black paint. But how long will it be this time before it gets dinged. It looks like the boys over at Platinum Motorsport really did their job in tuning this classic. The car now has a new body kit complete with air scoops and side vents and a little, tiny spoiler. So small in fact that you might miss it.