3 Crew Member Suspended by NASCAR
Up Next 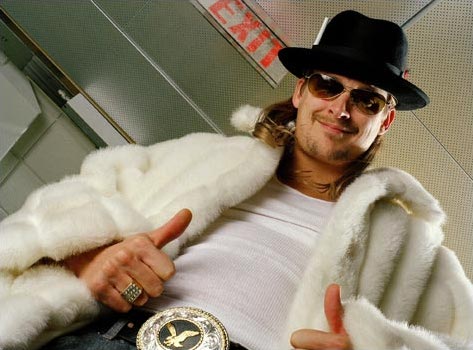 Detroit native Kid Rock will have the privilege to serve as grand marshal during the Sprint Cup race on June 14, scheduled at Michigan International Speedway. It will be the first time the well-known rock star will actively participate in a NASCAR event – which he admitted he's quite into – as he's set to wave the green flag for the Lifelock 400 three Sundays from now.

In addition to being the man who actually starts the race, Kid Rock will also lead pre-race activities, including taking part in drivers' introductions throughout the racing weekend at the MIS. Also, as stated in a press release from NASCAR, the 38-year old singer/songwriter will also “ride in the grand marshal car leading the field during the ceremonial parade laps.”

“I'm a huge race fan, so being asked to be grand marshal for the Michigan race to help kick off my summer tour with Red Stag seemed like a fun way to get the word out,” said Robert James Ritchie (Kid Rock's real name) who will also join popular NASCAR driver and Dakar Rally veteran Robby Gordon in the fan hospitality club at the MIS.

Kid Rock's latest album – Rock 'N Roll Jesus – was sold in more than 5 million copies and debuted as No 1 in the famous Billboard Top 200 chart.

The Lifelock 500 is scheduled on June 14, with the green flag set to be waved at the Michigan International Speedway at 2.16 P.M. Until then, however, the Sprint Cup caravan is set to make two more stops, the first of which will get under way this very next weekend, at Dover International Speedway (Dover 400).