When you think of four-door coupes being better than regular coupes, the mind naturally wonders towards the Mercedes-Benz CLS-Class... the old one. However, the same point is being made by two GT-badged cars, the Ford Mustang and Kia Stinger.
3 photos

They come from completely different segments and are supposed to appeal to different kinds of buyers. But Kia's cut-price masterpiece has shown it wants to fight everybody, including a Porsche Panamera and BMW 6 Series Gran Coupe.

This comparison comes from Australia, where everybody is wondering the same thing right now. What do you buy instead of the domestically built muscle car? Ford and Chevrolet are only too glad to import some ponies, but as we've mentioned, the Stinger is taking the market by storm.

The downside to it being an Australian video is that the Mustang is de-tuned, but the V8 still makes around 410 HP and 530 Nm of torque, both numbers which are superior to the 3.3-liter twin-turbo V6 in the Stinger GT (365 HP and 510 Nm).

Keyboard warriors might say that the newer Mustang with the updated injection system has a lot more power. But the drag race was shot at the end of 2017, and the 2019 Ford model won't be available in Australia until the end of this year.

These are the only two cheap RWD performance cars in Australia right now. And the Kia is not only much faster in over the quarter mile, putting its power down easily, but it's also practical. You can drive your mother-in-law to buy groceries, and she won't look at you like a degenerate drug addict. In fact, the Kia badge might convince her that you're a reasonable person. 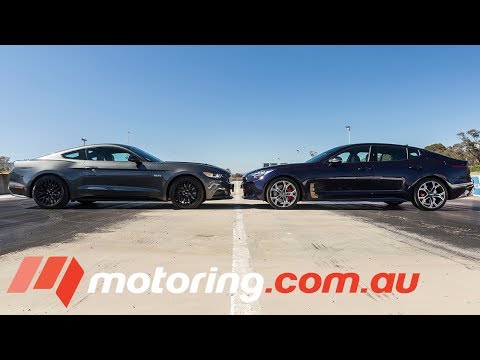