There are few Indian-produced vehicles on the global market – owing to the country’s poor reputation across the automotive industry. Notable exceptions have always existed – and the recent ones seem to focus on the compact SUV segment. Remember that Ford also manufactures the EcoSport in India alongside Romania, China, Brazil, Thailand, Russia, or Vietnam? Kia is another good example – the Seltos can be had from South Korea, China, and India. Now we should prepare for the second Anantapur, Andhra Pradesh crossover.
48 photos

The Indian subsidiary of South Korea’s Kia recently showcased the first virtual render with the production-grade Sonet compact SUV. The new image presented is just a preliminary design sketch, but we can already tell the crossover is sporting the automaker’s latest styling perspective.

According to the available information, the full reveal of the series-production Sonet is not far away and has been programmed before the summer’s end. Kia is already aiming to attract a younger client base with the Seltos and the new Sonet will double down on the efforts.

The company is pushing forward with its signature “tiger nose” grille and upgrades it with a new 3D “stepwell” mesh insert for added visual appeal. The company also hints at upcoming rugged features along with a rather aggressive general styling atmosphere – though we imagine some of the traits seen here have been purposely exaggerated.

“With the new Kia Sonet, we had the ambition to give this compact SUV a strong and muscular character found only in much larger vehicles. With this in mind, we have designed what we believe is a great SUV with a uniquely sporty attitude, a confident stance, and a dynamic silhouette,” said Karim Habib, Senior Vice President and Head of Kia Design Center at Kia Motors Corporation.

More importantly, this second “Made in India” model will not remain exclusive to its production location. Kia fully intends to market the new Sonet compact SUV on a global level and the official introduction of the international version is also just around the corner (Indian media pinpoints August 7th).

The Indian market introduction will take place during the upcoming local festive season (which kicks off in September). The company promises the Sonet will arrive with an emphasis on quality, top features for the class, new and innovative connectivity options, and a sweeping range of safety systems. 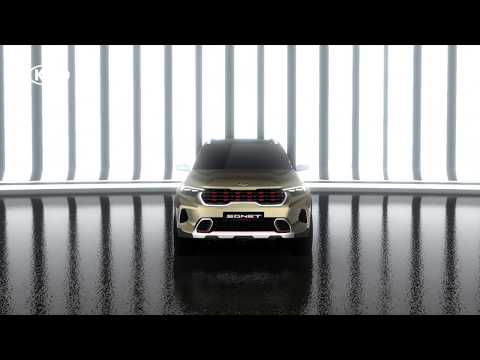 Editor's note: Due to limited availability of the official images with the Kia Sonet Concept we have elected to use the Kia Seltos model for visual representation in the gallery.