2 Lincoln Town Car Digitally Returns for 2022 as an EV, Makes the BMW i7 Look Pretty

While some virtual automotive artists are already trying to come up with a flagship vision for Kia's EV efforts, the pixel master better known as SRK Designs on social media wants to be slightly more anchored in the digital reality of what's immediately possible with the real-world EV6.
11 photos

Some automakers take styling decisions that have everyone bewildered and pixel masters stoked for giving them a multitude of CGI makeover ideas. Others have started on such a successful path that digital authors can only enhance the looks of their real-world models or try to predict the styling of future ones.

As opposed to BMW’s recent string of G07 2023 X7 LCI (and Alpina XB7), 7 Series, and i7 releases, Kia does not seem to be much of a target for virtual automotive artists. This is usually a positive thing, meaning that pixel masters have not found much they would like to change. Rather, they are more like: “this we can enhance, and that we can envision.”

Recent examples include an unofficial portrayal of the serene 2024 EV9 flagship SUV that will drop as a production series model based on the minimalist namesake concept sometime during the second half of 2023. Quite naturally, it was also benchmarked against the popular Telluride and its Hyundai Palisade sibling, as the upcoming EV9 will have to convince North America that battery-powered family SUVs are the way forward.

Of course, both Kia’s Telluride and Hyundai’s Palisade 2023 model year updates did not escape a quick makeover from a seasoned CGI expert either. Now, the virtual artist better known as SRK Designs on social media has decided to further expand the appeal of the first dedicated E-GMP battery model from Kia. So, he circled back to EV6, ignoring all three of the bigger SUVs and making this smaller, compact EV crossover SUV more adventurous than either of them.

Just like it happened with a 2022 Toyota Prius that got turned into a most unexpected off-road hybrid, now Kia’s fully battery-powered hero got treated to a so-called “Xtreme Edition” in the author’s latest behind-the-scenes making-of digital feature. So, does it look adventurous enough for your 4x4 cravings? 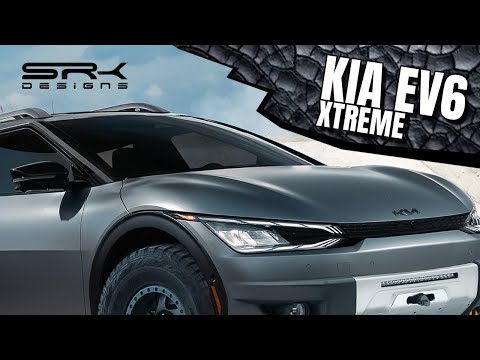