4 Another Tesla Model S Catches Fire in China, This Time in Guangzhou

5 GM Tacitly Admits Bolt EV Recall Is Not Enough, Asks Owners to Park Outside
Car video reviews:
Up Next

Kia EV6 Crashes Into a Concrete Barrier and Burst Into Flames, Are EVs Safe Enough?

Statistics show electric cars are a lot less likely to catch fire than internal combustion vehicles, and yet people get more emotional about EVs going ablaze. That’s why a Kia EV6 catching fire following an accident in Budapest, Hungary, had everyone freaking out.
19 photos

Fire is a frightening event, especially when you think it might be your life at stake. Nevertheless, fires are not uncommon, and we’ve seen cars bursting into flames regularly. This is nothing unusual, but when it comes to electric vehicles people tend to attach a heavier emotional load to that. It’s just like in the case of accidents in general: few are impressed when thousands of people lose their lives in car crashes every year, but when a plane crashes it’s a tragedy, although fewer people die.

I guess this happens precisely because there are a lot fewer plane crashes than car accidents to speak of, so being unusual makes it more impactful. That’s exactly the case with electric vehicles catching fire too. Official data show there are extremely few cases of EV fires, and yet no one speaks of an ICE as being prone to bursting in flames. No, it’s the Chevy Bolt that has this bad reputation, even though only a handful burned because of the faulty batteries.

A new high-profile EV fire is starting to make headlines after a Kia EV6 struck a concrete barrier and caught fire in Budapest the other day. While we don’t have all the details of the crash and the subsequent fire, we’re relieved to know that the driver escaped and he’s recovering in a hospital. His car was not that lucky, though.

Watching the video below you see the flames are stronger in the front part of the car. This could be explained by the force of the crash destroying the battery cells, which caused the battery to catch fire. The EV6 is the second Kia electric vehicle, after the Soul EV, and is closely related to the Hyundai Ioniq 5. Hyundai had already some problems with Li-Ion catching fire on the Kona EV.

While electric vehicles are not more prone to bursting into flames than their ICE counterparts, EV fires are indeed notoriously hard to extinguish. Trained firefighters usually have to submerge the whole car in a water pool and just wait for the battery to cool off. Without the water pool, the firefighters need thousands of gallons of water before they can stave off the blaze of a burning Li-Ion battery. 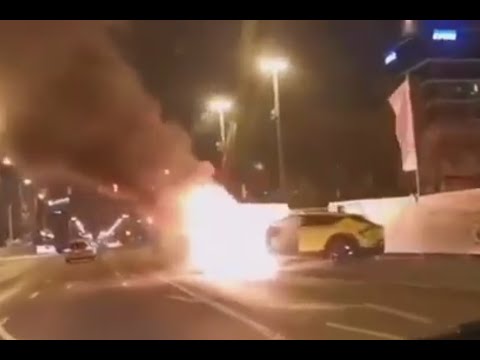