1 ONE100, the Dubai Mansion With Custom Harley You Can’t Ride, Rolls and 599 GTO

4 Celebrities Who Got Banned from Buying a Ferrari

Khloe Kardashian’s Garage Has Everything but Real Cars

Celebrities, they’re not like us, after all. While us regular mortals would use a garage for the purpose it was intended for, i.e. house a car, Khloe Kardashian’s has everything in it but real cars.
10 photos

It does, however, feature an entire fleet of kiddie cars, which are the sole property of her daughter True. True, for those who don’t know, is two years old. You need serious transportation options when you’re two, stop judging.

Khloe was featured on the most recent episode of the new Netflix series Get Organized with The Home Edit, which some have described as “Marie Kondo but make it white.” It’s a show that features both celebrities and regular people who turn to professional organizers Clea Shearer and Joanna Teplin for help in getting a room or an entire house in order.

Khloe did that, too: the episode focused on how she needed her garage organized. You can see photos in the gallery above, and if you’re thinking “wait, this isn’t even messy to begin with,” you’re probably not the only one. But this is showbiz for you. Also showbiz: this is probably not Khloe’s main garage, which explains why she doesn’t have an actual car in it, even though it could easily accommodate three.

True, on the other hand, this one has an entire fleet. From a single glimpse, you can spot a couple of Bentleys and at least a couple of Mercedeses, including a white G-Wagon. While these kiddie cars are cheap, compared to the life-size versions that inspire them (they sell for under $1,000), the collection is still impressive. This is a 2-year-old we’re talking about.

Once the organizers were done, True had an entire parking lot inside the garage, all to herself. Her rides were parked neatly in designated spots, separated by light pink tape and dark cones. She seemed to love it, but, then again, she’s two. Everything else, like merchandise and unopened gifts was relegated to the storage units brought for the purpose. In the middle of the garage, where a car would normally sit, was Khloe’s painting station. 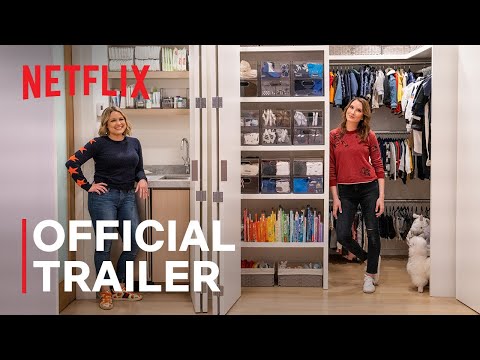