Harley-Davidson Balfern Is Like a Night Train Spawn From Hell

We all know Kevin Hart loves cars, and since he also enjoys a, let's call it, "above average" financial status, that means his passion is likely to take the form of a few very beautiful and special vehicles.
10 photos

The well-known comedian has had a good portion of his past and present collection advertised one way or another, from videos like the one below detailing a car to news of his older or less preferred models going up on sale.

These occasions gave us a peek inside Kevin's garage, and while the lineup is pretty heterogenous, you can't help suspecting he has a soft spot for all things American. And given the long and rich U.S. automotive history, why wouldn't he?

He's no stranger to a few European models either - anything from a Mercedes-AMG G-Class to a Ferrari 488 Pista - but he always seems to return to a good old classic American. And when he does, he doesn't just buy them but also has them custom-made to his own desire.

Take this 1969 Chevrolet Camaro, for example. The '69 model is arguably one of the best-looking Camaros ever made so, from an aesthetics point of view, it makes for an excellent starting point. Indeed, Kevin's monster - nicknamed "Bad News" - does not disappoint, keeping everything that makes the '69 Camaro so instantly recognizable and adding a ton of personality on top of it.

The build goes for a murdered-out look, though the intention is never stated - nor is it carried out to the end since the windows lack any kind of tint (yet?). Apart from that, it has an aggressive front splitter, wider fenders (more on that later), an air diffuser at the rear, and a set of black Forgeline wheels. All-in-all, the car has a very coherent aspect, which is always worth appreciating.

On the technical side of things, "Bad News" gets a destroked LSx-based 380ci (6.2-liter) LS7 V8 garnished with a pair of 68mm Turbonetics ball-bearing turbochargers. The result is a powerplant that puts 650 horsepower to the wheels as well as a maximum torque of 680 lb-ft (921 Nm). Even so - or should we say, "despite that"? - Kevin Hart's driving is described as "mellow cruising." How that is even possible, we don't know.

So, back to those flared fenders: they're there to make room for the obscenely wide tires that the guys at Timeless Kustoms got from a Dodge Viper. It runs 305s up front and 355s at the rear, which is basically just stopping short of giving it one big cylinder, The Flintstones-style.

As good as the Camaro is to look at - and it is, both inside and out - the sound it makes is just as exciting. The bad news is delivered very loudly thanks to a custom-made exhaust system that doesn't include a muffler, and when the throttle pedal is depressed after a short burst of acceleration, that lovely blow-off valve sound makes itself heard as well.

It's an all-round spectacle this car and if you like what you see, don't start stalking the auction sites just yet. Kevin has just had it updated, so he's clearly planning on enjoying it for a bit more. Who knows, it might even be part of his permanent, no-sell collection. It would be part of ours, that's for sure. 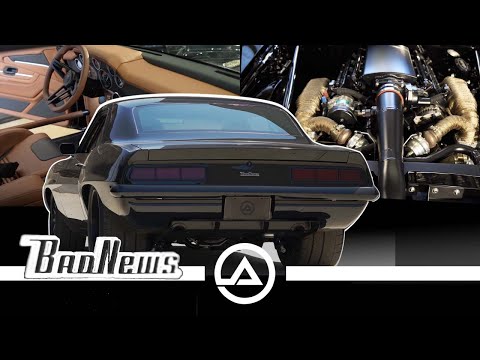