What looks like a Harley-Davidson motorcycle, a trike, a semi, and a camper all at once, but isn’t any one of those things? That’s not a tricky question because such a rig does exist: it’s called the KennyBilt, or the Harley-Davidson 9-Wheel Camper.

The KennyBilt is the most recent addition to the Wheels Through Time Museum from Maggie Valley, North Carolina, which houses over 375 of the rarest motorcycles in the United States. Founder and curator Dale Walksler prides himself on the fact that the museum is all-American, showcasing American builds and American ingenuity from the early 1910s all the way through to modern times.

In its almost two decades of existence, the Museum has gathered some very interesting pieces. That said, perhaps few could hold a candle to the KennyBilt, one of the most unique, strange, and, at the same time, awesome Harley-Davidson rig ever. We’ve all seen more than a fair share of HD rigs, some crazier than others, and many of them downright insane (and not in a good way), but this one is a true stand-out.

Perhaps the first question that comes to mind when seeing the KennyBilt is “Why?” A better one would be “Why not?” KennyBilt is a dream rig, as dreamed by Kenny Kilpatrick from Huntsville, Montana, who spent almost a decade working on it. It is effectively a Harley-Davidson mini-semi, with a comfortable camper in the trailer and a trike in front. It’s built entirely from the ground up around a Harley engine, with Harley’s blessing and sponsorship.

While the KennyBilt is a familiar sight to bikers in the U.S. (and not only), not many details about it have been made public. Dale says that Kilpatrick built it only after seeking and obtaining permission from Harley-Davidson, which meant he could freely use the paint scheme and logo of the brand, as well as get some parts free of charge, starting with the engine. The project was completed in 1989.

He started out with a 1340cc Harley engine and built around it until he got a 30-foot (914-cm) creation that almost defies all expectations. As its name implies, the KennyBilt has nine wheels, though, at one point, it had dual wheels in the front, which made it a ten-wheeler. It features a modified clutch and transmission, air brakes, and, much like a proper truck, a double rear axle and double pivot section behind the trike.

The trike offers seating for three, but four slimmer adults can easily squeeze inside as well. The rig rides on Dunlop tires, many of which had dry-rotted when Dale went to pick it up and weighs 4,000 pounds (1,814 kg). He says the rig has traveled across the U.S. and been to many international shows, including in Europe, mostly on Harley’s dime. No word on whether Kilpatrick actually got to use the rig on its own or whether it spent most of its time in the back of an actual trailer, moving from place to place.

It would have been a shame if this happened because there’s a comfy camper in the rear. Despite its rather utilitarian aspect, the interior is a cozy area, albeit one turned into an unofficial Harley museum. You get a sofa in the living area, with skylights all around to let in natural light. You also get display cases for all the awards the rig won over the years, cabinetry, and a queen-size bed in the front. All in all, this is the most comfortable you could be on a bike on extended trips, outside of nightly stops at hotels.

When Dale found the rig, it had been abandoned in a gravel pit for almost ten years. Dale says his father and Kilpatrick had been close friends and that the former would always pressure the latter to let him have the 9-Wheeler to display in the Museum. Though he was no longer taking it to bike shows, Kilpatrick was too attached to it to give in.

The builder passed away earlier this year, and his widow called up Dale to let him know that he could have the rig for the Museum. To his surprise, Dale found it in excellent condition, despite the fact that it’d been abandoned to the elements. This is a testament to the quality of the build and the skill of the builder, he says. He only had to replace one wheel and the tires and perform some minor repairs to get the thing moving again.

The KennyBilt, aka the Harley-Davidson 9-Wheel Camper, is a “whole lotta bing and lotta boom,” as Dale puts it. It will go on public display at the Wheels Through Time Museum in April when it reopens to the public. 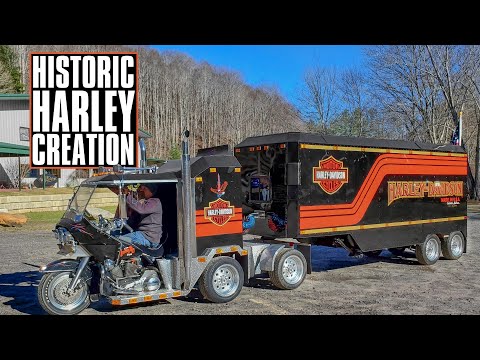