3 Ken Block Hands Over the Reins to Travis Pastrana for Gymkhana 11, We Get a Peek

Have you been following Ken Block's conversion of his Hoonicorn from what is presumably a drift car to a straight-line racer? Yes, presumably, because the heavily modified 1965 Mustang is turning out to be a hell of a drag racer.
8 photos

Well, you would kind of expect that considering it has 1,400 hp, a super-fast six-speed sequential gearbox, and all-wheel-drive for that instant launch off the line. Couple that with a set of wide and sticky tires, and you pretty much have the recipe for something with monstrous amounts of power that can also put most of it where it matters.

So far, this Forza Horizon-inspired series has seen the Hoonicorn go up against all sorts of vehicles, from the video game's poster boy, the McLaren Senna, to much wilder builds such as a Trophy Truck, a donk, a crazy-powerful Audi RS3, a Mazda RX-7, and the list could continue.

Now, though, Ken Block's pride and joy is racing a 2019 Ford GT Carbon Edition, a rare version of Ford's rare supercar and, to make it even more special, this one is owned and driven by a guy whose name you might have seen on a lot of modified cars: David Borla. Yes, that Borla. So at least we know for a fact that even if it won't win, at least the GT is going to sound great (jump to 5:20 and see for yourself).

And, let's face it, it won't win. The GT has a V6 EcoBoost engine, and despite the fact it draws a lot of power out of the six-cylinder unit - 647 hp, to be more precise - that's still less than half of the Hoonicorn's output. However, the limited-edition supercar's disadvantages don't end there.

The only area where the two cars are somewhat comparable is with their transmissions since the GT sports a seven-speed dual-clutch automatic, which we know can swap cogs really fast. It should also have gearing that's more suited for the occasion than Block's drift car, though that didn't seem to bother him in any of the previous races.

That said, the Hoonicorn has it beat in any other respect, and by quite a margin. The fact David's reactions are by no means spectacular doesn't help either, so what we end up with is a great spectacle, albeit not a very captivating contest. You're still going to watch it, though. 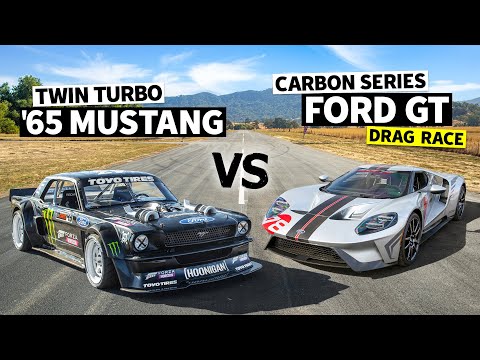