Ken Block Reveals His Ultimate Dream, a 736-HP Audi for the Street

If you're a race driver and you're having difficulties in finding sponsorships, you might want to take a look at Ken Block's career. You'll learn a thing or two about building up your image and reputation and, of course, about creating quality content. Ever since his early Gymkhana days, Ken has been growing and growing, and here we are today.
18 photos

Sure, he's had a lot of cool cars in the past. Who could ever forget the Hoonicorn? We won't even go into the whole RS200 story. A few people were disappointed to see Mr. Block moving to Audi. Seeing him driving around in an all-electric vehicle felt a little unnatural, but he was bound to give fans a bit of ICE magic as well. After getting an RS e-Tron GT as a daily, he made his next step at the SEMA Show, where he unveiled his dream car.

Ken bought the Sport Quattro from LCE Performance in Germany, had it shipped to the US, and then painted white. The outcome is an absolute work of art. Sure, it doesn't have the crazy Group B aero on it, but that's because he is going to drive this out on public roads! This replica Sport Quattro was just unveiled at the SEMA Show in Las Vegas, in the Toyo Tires booth. His teammate, Brian Scotto, also revealed his Audi build in the same booth, thus providing a nearly 1,500-horsepower display!

According to Ken, he intends on driving this car hard. Even though it's unlikely that this is going to be the main star of his next Gymkhana film, it might still make an appearance at some point. The Rotiforms are reminiscent of the ones you'd see on the S1 E2, but these are based on their ROC wheel. But with some changes being brought forth, Rotiform has named these the ROC-H, as they are a special design for Hoonigan's project.

The entire body of the car is a mix of carbon and carbon-kevlar, so you shouldn't rush to make judgments regarding its potential. Inside, the car's running a set of Recaro Pole Position classic bucket seats that are reminiscent of the graphics you'd normally see on Ken's competition cars. Recaro notes that these seats are "Walter Röhrl approved." And it doesn't come as a surprise that the dashboard has been signed by the legend himself too.

The hydraulic handbrake used for this Audi used to be a backup solution for the Hoonitruck, so there's some history there for sure. Even though Mr. Block intends on using this car on public roads, this is more of a rally car in disguise. And that becomes obvious time and time again, especially with all the switches and fuses on the dashboard and the 10K rpm tachometer. Oh, and did we mention that the turbocharged 2.5-liter engine puts out 736-horsepower? 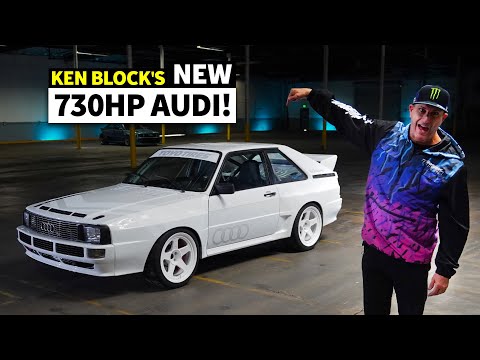