1 Pacific Harmony Is a Tiny Home That Maximizes Space, Has an Adorable Front Porch

5 For Under $100K, Lila Tiny Home Unlocks All the Benefits of Downsized and Mobile Living
Car video reviews:
Space Junk

"Dude! Let's buy a beach house!" "What the! What do you mean buy a beach house? Does it look like we've got the cash for something like that? Let alone the plot of land required to build upon." "Well, yeah, we do. All we need is like $42K a piece, and we've got ourselves a mobile beach house like this bugger." "Oh! Ok."

It's quite possible that you may have found yourself in a similar conversation with a friend throughout your life. If you have, this next one is for you. What we'll be exploring today has been dubbed the Keepsake. It's a mobile downsized home from the minds and hands at Tiny Heirloom, a crew we've seen many times before.

And why is this crew so sought-after? Simple; they build some fantastic habitats for their owners, some of which become available to future owners too. It's how several units you see on their website came to life. Even the Keepsake is based on a popular existing model, but it's not specific which one.

Mind you, what we'll be exploring today is made up of nothing more than the images in the gallery and the video below, which are renderings. Yet, Tiny Heirloom is the sort of crew that showcases RVs and mobile habitats they can build for you right now, and Keepsake is ready to be crafted the moment you make that phone call.

Overall, Tiny Heirloom is asking you to drop no less than $84,000 (€80,000 at current exchange rates) on the Keepsake, and for that cash, you'll unlock a 20-foot-long (6.1-meter) home with not just one level, but two, the upper floor is suitable for sleeping, provided by a loft. But we'll get to that shortly. For now, let's take a trip.

Picture this: you've bought a Keepsake, and you and your surfing buddy are ready to hit the coastline. Because you don't need too much space to park your home, you decide the beachfront will do, at least until authorities show up and you have to show them all that paperwork.

With parking and transport permits out of the way, it's time for you and your adventure buddy to check out all that is the Keepsake. Since you won't be staying in one place for too long, you decide that an exterior deck is something that isn't of use; it's all about the beach and possible babes on this trip. Because two sleeping areas are available, one of you can take the loft and the other downstairs. If you're traveling as a couple, one of these lofts could easily be transformed into a gear garage.

Let's say the police showed up right before you went to bed. Well, once you arise the next day, you'll climb down from your loft and access all the appliances you need to make coffee, whip up breakfast, and even plan lunch. With teeth brushed and meals eaten, it's time to hit the waves or whatever activities you planned for. Don't worry about living systems; the front of this RV features a massive closet for electrical, waterworks, and any other features you may want to add. Solar panels are always a great idea.

Worried that the sea's air may eat away at your home and its exterior? Don't, as each Keepsake isn't just insulated but also features a PVC roof, a Zip System moisture barrier, and all that's set upon a DOT-approved hand-built chassis. Diving deeper into this home, I learned that the deck is included in the asking price, allowing you to also turn this tiny mobile home into one heck of a beach house.

At the end of the day, if you ever decide you want a summer beach dwelling, heck, maybe even one that allows you to explore colder areas, the Keepsake is one model to consider. If you commission a Keepsake for building, drop a comment about how it turns out in real life; I'm curious. 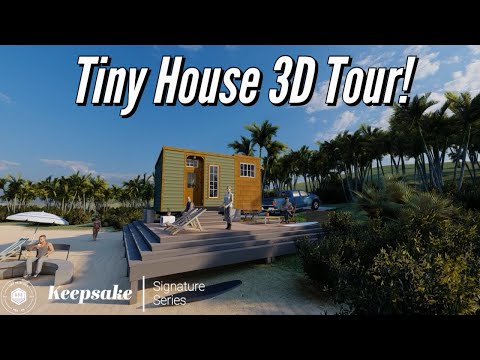 Editor's note: This article was not sponsored or supported by a third-party.
Images in the gallery include an array of Keepsake styles and trim packages.