1 Ford Found a New Way To Improve EV Efficiency, It Helps a Little

These Are the Cars in France's Superstar Kylian Mbappe’s Collection, He Doesn't Have Many

Kawasaki Introduces Bex, the Robot Goat That You Can Ride

What’s better than an electric motorcycle? The answer, even if you didn’t know it until now, is Bex, a goat-shaped robot from Kawasaki that you can actually ride. Giddy up!
9 photos

This won’t be a particularly comfortable or fast ride, but still. At this year’s 2022 International Robot Exhibition in Tokyo, Japan, Kawasaki introduced Bex, a robot goat with a focus on multi-functionality (hat tip to TechXplore).

This sounds like a joke, but it’s not. Bex is part of the Kaleido project, which stems from Kawasaki’s Robust Humanoid Platform (RHP), and it’s named after the Ibex wild goat. Unlike the real-life counterpart, it sports flashing lights along the neck and antlers, as well as wheeled joints and the ability to walk (quite inelegantly).

Designed with a modular upper part, Bex can be used to carry a human passenger or, if need be, 100 kg (220 pounds) worth of cargo. Also modular is the head, which can be replaced with any other animal head of the owner’s choosing or even no head at all, according to Kawasaki.

Silly as all this might sound, Bex is indeed multi-functional. It can walk slowly on all four legs, and the speed is of no consequence because this mode of transportation is only meant for traversing rough terrains. When it’s placed on smoother surfaces, Bex kneels down, and the wheels in the now-locked joints touch the ground, as does another set of wheels on its belly. Let’s see Spot the robot dog do that.

Top speed is not mentioned for either mode, but the aforementioned media outlet notes that “it has been engineered to move quickly in its wheeled configuration.” Just how quickly that is, is anybody’s guess. The same goes for the spec list.

With a focus on safety, Bex is meant to be stable: in wheeled configuration, all its wheels are on the ground, while in walking mode, two of its legs are always touching the ground. Seeing how it’s meant to haul around stuff and people, it makes sense for it to not topple over, cargo and all. Kawasaki did not mention any plan to bring this robot goat into production, but it’s probably wise not to hold your breath for it.

The video below is from the official Kawasaki presentation for Bex. An engineer showed how the robot goat works in riding mode, holding onto the integrated bike-like handlebar in front, feet placed on two pegs. It doesn’t seem like a particularly smooth ride, as short as it is, and it doesn’t show Bex in wheeled transportation mode. One can only assume that it would have looked like the engineer was riding a goat-shaped, slow-paced e-bike, and what a sight that would have been. 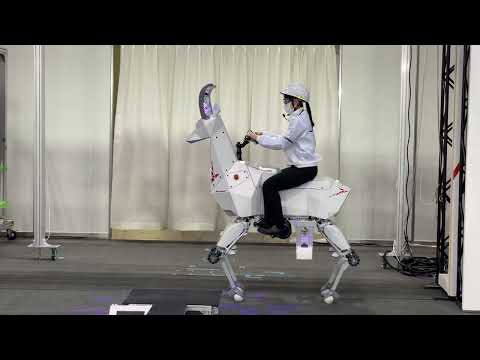