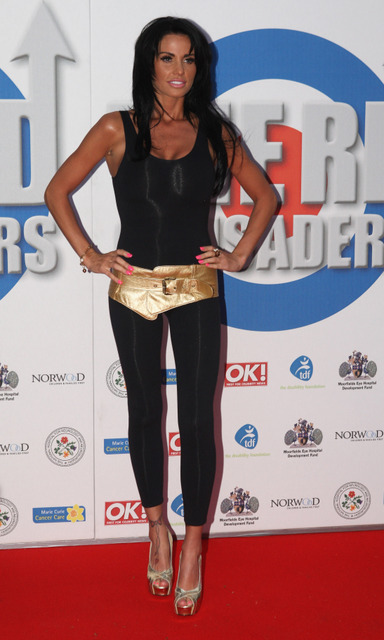 While ordinary people get speeding charges when exceeding the legal limit, celebs like model Katie Price known also as Jordan manage to get away with the help of a legal loophole.

The Daily Mail says the 30-year-old model, mother of three, was accused of exceeding the legal limit with 30 mph in Brighton last year. Sussex Police have written to her many times to ask who was driving the car at that moment, but Jordan didn't bother to answer. Thus, she was also charged for not providing the identity of the driver in a trial that was held yesterday.

Her defense barrister, Katherine Hudson, managed to convince the Brighton court that the testimony of the prosecution's only witness, police administrator Karen Rickson, shouldn't be taken into consideration.

“Karen Rickson did not enter the details of the speeding offence on the computer herself. She was an administrative staff member who retrieved the information and wrote several letters to Miss Price,” a legal source said adding that “'because she was going to tell the court about details she had not inputted herself on the computer system, the CPS should have applied to allow hearsay evidence. But they didn't so her evidence was not allowed. It's a big mistake on their part.”

However, this is not the first time Jordan manages to escape speeding charges using legal loopholes. Five years ago, her defense barrister Nick Freeman convinced the court his client (Jordan) was not guilty in another case of speeding.

Apparently, Freeman, who charges up to £10,000 a day, has defended other celebs too who managed to avoid the hand of law in this way.

Following these incidents, Jordan has her critics risen up. Edmund King, of the AA, said: 'The situation is getting somewhat embarrassing when it appears that there is one law for the rich and one for the poor.”

“On the one hand these loopholes shouldn't exist but the speed limits are there for a reason. Just under 3,000 people a year die on our roads every year, mainly as a result of people driving too fast,” he added.

We refrain from any comments related to her critics but the question we could just not pass over is: Wouldn't it have been cheaper to pay the speeding ticket than a reputed defense attorney?!