4 Epic and Silly GSX-R600 Fail and a Lucky Save

5 Motorcycle Safety Fail at Its Finest Level
Car video reviews:
Up Next

Lamborghini Crashes into Luxury Showroom, Takes Two Ferraris Down with It

You’d think that people choosing to go places on two wheels are more careful than your regular car driver, but there are plenty of examples out there to prove you wrong. From bicyclists choosing to ignore a red light and dart over intersections to this new breed of kamikaze electric scooter riders.
1 photo
Whoever decided it’s OK to put an electric motor and a battery pack onto a flimsy, almost brake-less scooter and sell it for profit should be strapped to a chair and tickled with a feather... in the ear... for two days straight.

It is acceptable to ride such a thing as long as the only thing powering it is one of your legs, but things could go south pretty quickly if electricity comes into play. I mean, the human body standing on such a narrow platform with two tiny wheels has a pretty high center of mass which will turn out into a wobbly unsafe ride at speed.

Combine this with an unexperienced, overly-enthusiastic operator that filters through traffic and chances are somebody will have a screwed up day. Someone like this this Romanian motorcycle rider in the video below who got rear-ended by such a scooterist.

Early in the video, the biker’s helmet-mounted camera captures the moment a guy on a green electric scooter cuts through the standing incoming traffic and joins the ongoing lanes. I’m not even going to talk about the fact that what he did in the first place was dangerous.

The sportsbike rider continues his way and after a while the traffic up ahead clogs up, forcing him to filter. Closely watching his right rearview mirror, you’ll see the kamikaze scooterist following him quite close despite the fact he knows his brakes are bad and the asphalt is wet.

An incoming wild taxi appears at some point wanting to turn left and the biker decides it’s better to brake and let it pass. As you can imagine, the scooterist behind is already traveling too fast for his puny little brakes and rams the bike from behind with the results being shown in the video bellow.

Funny how the rider manages not to fall next to the bike by propping his hand onto the fallen scooterist's head. 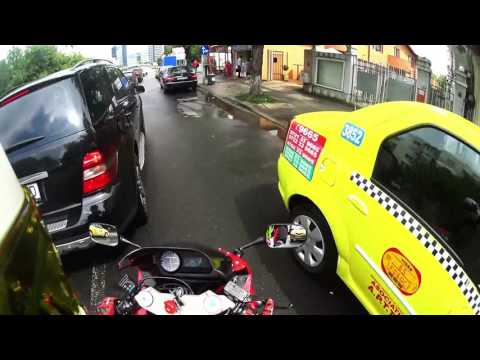