4 Flying on Pan Am Used to Be Amazingly Luxurious, Kick the Hell Out of Modern Airlines

K-Swapped Mini Jet Boat Hits the Water for the First Time, Tops Out at 46 MPH

About a decade ago, it felt like every other swap was using an LS engine. And that makes perfect sense. Who wouldn't want a reliable power unit that makes a lot of power and torque and also has a nice tune to it? It's still quite common to see Japanese and even Euro cars using this engine today, especially when it comes to the world of drifting. But the last few years have seen an influx of Honda K-swaps. They're even cheaper and can be quite potent if you strap a turbo on them.
9 photos

We've lost track of how many cool builds we've seen that were using Honda's engine. You can pop the hood of an RX-7 and find one under there. It can even happen with an older Porsche or Ferrari as is the case with the Stanceworks Time Attack build.

You can buy a K24 for under $1,000, while the bare block will only set you back half that amount. You can get it up to about 350 horsepower with a minimal investment. But of course, you'll have to spend more on tires, brakes, and an ECU tune.

But there's one way of avoiding the cost of tires and brakes. And the guys over at BoostedBoiz have found the solution by building a Mini Jet Boat instead of a car. They've done countless swaps on their vehicles over the years, but it seems like they're always coming back to Honda's inline-four unit.

About five years ago, they started building a Toyota MR2 with a K20 engine. Then, they did something similar with a Subaru Impreza WRX STI. Their following project was an older, K20-powered, AWD Honda Civic. At least that was a more pure Honda build.

Some 10 months ago they upgraded a Mazda Miata by using the same kind of engine, but the interesting part was yet to come. After getting a taste of going fast on the water with their 500 hp Jet Ski, these guys started working on a new 12' Mini Jet Boat which came as a kit from Jetstream Adventure Boats.

As soon as they got it back at HQ, they even performed an initial test in their backyard pool. An engine was already on standby, and the initial goal was set at 350 hp.

After their new custom jet drive unit arrived at the shop, the project started moving forward. But it would take several more months a quite a bit of custom fabrication work to get it close to completion. After making sure that their project was ready to hit the water, they loaded it up onto the trailer.

The launching ceremony went quite well, and they decided to see how fast this thing can go. Even without a turbo attached and a limited RPM range to work with, they went as fast as 46 mph (74 kph) on the first test. It's nowhere near as fast as their jet ski but they estimate that with the added boost and unlocked RPM it might go up to 60 mph (96 kph). 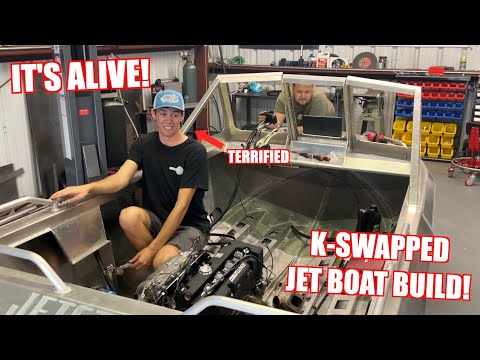