4 Justin Bieber Looks Back on His 2014 DUI, Drag Racing Arrest

Justin Bieber is 26 and worth an estimated $300 million, give or take a few cents. He is still young enough to want very eccentric things and, more importantly, he is rich enough to afford them.
8 photos

It was first sighted by pure accident at the beginning of the month. Some days later, West Coast Customs confirmed that the vehicle was, indeed, their work. In several posts on social media, they offered a glimpse into the process, and how they’d taken a 2018 Rolls-Royce Wraith and set out to transform it into a very futuristic, one-off ride.

That was, of course, Bieber’s idea. In a new video from WWC, we learn that Bieber was so taken with the 103EX Concept that he wanted to buy it. When he was told he couldn’t, and even if he could he could not have driven it, he commissioned WWC to build him the next best thing.

Bieber’s “floating” Rolls took three whole years to build, apparently, but it was time well spent as far as Bieber was concerned. When he took delivery of the car, he was floored – literally so, he fell to the floor on his knees and had to wipe away tears from his eyes (that’s at the 10.05-minute mark in the video below). There is nothing wrong with a grown man crying, of course, so this isn’t about bashing him for turning on the waterworks as he sees his dream car for the first time.

If anything, Bieber’s reaction proves that this was more than just a passing whim: the dude really loved that concept car and he really loves what came out of the hands of the WWC team. Bieber expressed his appreciation for the “smooth” wheel covers, which should create the floating look on nighttime drives, the overall futuristic design and, last but not least, the pro audio system that turns it into a genuine studio on wheels. Since he’s a musician, one gathers that must weigh heavy in the balance with him.

“I wanna take it for a drive,” Bieber concludes, after he’s done taking it all in, and the tears have turned into that itch all new car owners get as soon as there’s a signature on the dotted line. And that he does, riding off into a figurative sunset. 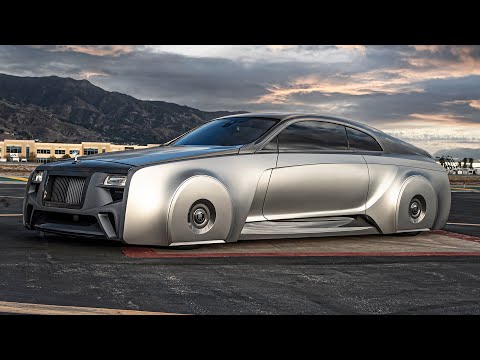