3 For the 2021 Solar Eclipse, Book a Cruise to Antarctica With Quark Expeditions

Daniel Patrascu
A little more than a month ago, on June 10, some residents of Canada, Greenland, and Russia got their dose of a full annular solar eclipse. Further down toward the Equator, others were treated to a partial eclipse. But none of us got to see something like this before.
6 photos

As some of you might already know, a solar eclipse happens when the Moon gets in between our planet and the Sun, obscuring it from view and stealing its light away from us. That also means the Moon’s shadow is cast over large swaths our planet.

The problem is we can’t really get to see that shadow, now do we, as most of the satellites in orbit around our planet are caught in it, seeing how they are all located between the Earth and the Moon in terms of distance. Well, not exactly all of them.

You see, the average distance between the two celestial bodies is 384,400 km (238,855 miles). But we Earthlings have a piece of tech almost 1 million miles (1.6 million km) out, and it was this one that captured the amazing shot you see attached to this piece and in the video below.

The hardware is called Earth Polychromatic Imaging Camera (EPIC) and is hosted by the NOAA Deep Space Climate Observatory Satellite (DSCOVR). It is usually tasked with coming up with images of our planet that could help monitor the planet’s vegetation, cloud height, and ozone.

This time, it captured an image of the Moon’s shadow creeping down from where the North Pole would be, right above Europe and Africa. It looks scary, as if there’s something wrong with our planet, but not as scary as it would have looked had the Moon been closer to Earth.

That’s because this was an annular eclipse, one that took place with the satellite near its farthest point from our planet, thus at its smallest apparent size. 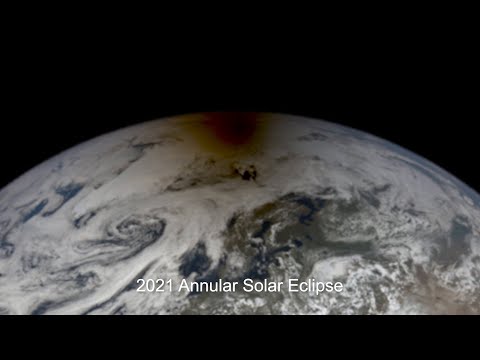