Drag racing sounds like one of the safest ways in which two vehicles can compete against each other head to head. It's just two cars going at it, each in its own lane. How hard can it be to keep a straight trajectory, right?
7 photos

Well, if it were that easy, everyone would do it. Besides, some of these cars aren't your ordinary out-of-the-box vehicles that you can commute to work just as well as you can push it to its limits at the drag strip. The Tesla Model S can, but it's more the exception than the rule.

Then there are the G-body builds. The cars based on the GM platform have earned themselves the unenviable reputation of often veering toward the other lane, either directly or via an impact with the rails on the side of the track. Obviously, you want to be as far away from that as possible when it happens.

As soon as the Model S driver saw the car he was paired with, he felt his spider-sense tingling. Being a former motorhead (that is if he doesn't still qualify as one now that he drives an EV), he knew too well what the G-bodies are all about, so he had a decision to make: either he backs out of the race (never an easy choice), or he makes sure he puts plenty of distance between his car and his opponent's right from the start of the race.

He admits he's not sure whether jumping the red light was a conscious or subconscious decision, but regardless which part of his brain was behind it, we're sure he'd like to take it out for a beer now. He let go of the brake pedal with 0.224 seconds before the start and, luckily for him, the G-body driver didn't do the same.

Looking back, it might have been his early start that prompted the other drive to overreact and mess up the launch. Seeing the other car shoot forward while you're standing still is never a nice feeling, so that might have prompted them to give a little more gas than they should.

The fact of the matter is that the G-body went into a short wheelie before coming crashing down and veering right, straight where the Tesla had been only moments earlier. The phenomenal off-the-line acceleration of the Model S would have probably been enough to save it even if the driver hadn't jumped the light, but nobody wants a close-call if it can be avoided.

The crash meant the strip had to be closed for a full hour afterward to clean up all the fluids that were spilled on the track. In the end, what matters is everyone was fine, but it goes to show you that a bit of caution can sometimes pay off. The Model S driver himself sums it up perfectly: "Drag racing is dangerous[,] kids. Don’t believe anyone who tells you otherwise!" Amen to that. 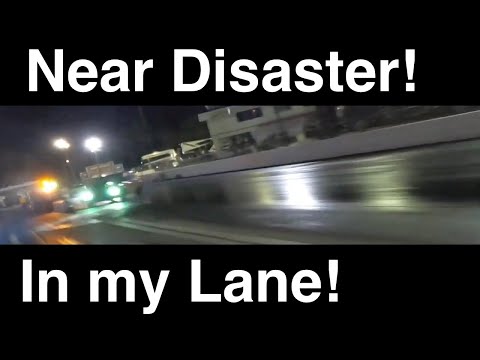