1 Confirmed: Lightning Motorcycles Is Working on a Fully-Enclosed e-Bike

2 Gogoro’s Eeyo 1 e-Bike Is Super-Light and Fast, Smart and Innovative

5 The Capri e-Bike Is Sleek, Stunning, Incredibly Light and Reliable
Car video reviews:
Up Next

What looks like a motorcycle, is technically a bicycle and delivers performance that is halfway between these two-wheelers? The answer is a HyperScorpion moped-style electric bicycle from Juiced Bikes.

Juiced Bikes’ HyperScorpion Is an e-Bike With Quite a Bite

If you haven’t heard of Juiced before, it’s probably because you’re outside the U.S. The San Diego-based maker delivers some of the most powerful and reliable e-bikes out there, but it only does so on a national level – and mostly online, cutting out the middleman that would be bike dealerships.

Juiced Bikes’ latest product is the HyperScorpion, funds for which were raised on Indiegogo, together with its younger and somewhat less efficient sibling, the Scorpion. Deliveries on the first items have started for pledgers, which means this is the perfect opportunity to talk about it in more detail.

And this is exactly what founder and CEO Tora Harris does in a new video posted to the official Juiced blog. Just like Scorpion, the HyperScorpion is meant to be a retro-inspired moped-style electric bike that aims to deliver solid performance, reliability and safety, all in one package.

While many other e-bike makers set out to achieve about the same goals, Juiced is actually able to do so.

“The original concept was to be a retro style moped like you saw in the 70’s and just make it electric,” Harris says. “And I think we definitely hit that target. One of the issues with step- through frame bikes is they can kind of look a little bit goofy so we wanted to make them look actually cool but still retain the step-through so that anybody could ride this bike.”

The HyperScorpion packs a powerful 1,000W Bafang Motor, which was developed as part of the 10-year partnership between Juiced and Bafang, so it’s unlikely you’ll see it on any other e-bike, and a 52V/19.2Ah battery that is 40% bigger that average battery packs. This translates into a better range and longer battery life. Harris says range is estimated at over 70 miles (112 km) with pedal-assist, and it drops considerably if you choose to go on throttle only.

Speed and range aren’t the only aspects where HyperScorpion stands out. It’s turned into the ideal off-road companion through the use of hydraulic disk brakes, which guarantee instant stopping and improved control throughout the ride, adjustable dual suspension system, and gets instant pedal-assist activation by means of a torque sensor and a cadence sensor.

Custom 20″ x 4.25″ tires with puncture protection offer riders peace of mind when it comes to unexpected obstacles – such as shattered glass, as shown in the latest overview video. You can see it in full at the bottom of the page.

Naturally, with a bicycle this fast, safety is paramount, so Juiced added extra safety elements, which though not mandatory from a legal standpoint, will add to an increased sense of confidence for the rider and better visibility on the road. The HyperScorpion comes with integrated turn lights (both front and rear), a large headlight with 2,000 lumens, brake light and a light right above the license plate holder. It also has side mirrors as standard equipment, and an integrated horn that sounds just like a motorcycle horn.

“Electric bicycles are getting faster and they’re also being used more often on the road with cars,” Harris says. “All together it brings a different kind of presence which gives a little more respect when you’re on the road.”

At the same time with the first deliveries to Indiegogo pledgers, Juiced is taking pre-orders on the HyperScorpion at a discounted price of $2,899. At the full price of $3,499, yes, this is a premium e-bike but can you really put a price on how much fun you’re going to have with it? 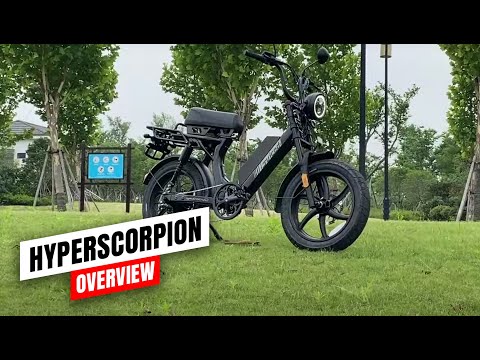