Remember the mad Audi RS6 Jon Olsson had made for this year’s Gumball 3000 rally? We do and not just because of the famous skier but also because of the extensive work that was done to the car.
1 photo
As a quick reminder, we’ll point out that the RS6 Avant model was decked out with a DTM body kit that’s made of carbon fiber almost entirely. That kit turned it into a monstrous ride for the streets, and we’re honestly surprised it’s road legal, considering the extensive modifications that occurred.

Apart from changing it visually, Jon also went for a modified engine as the stock 560 HP seemingly weren’t enough. Therefore, the 4-liter V8 was fitted with a set of custom 18 karat gold anodized TTE9XX turbochargers that allow the mill to put out 950 HP now. That’s on regular fuel. Throw in some race fuel and things go over the 1000 HP mark in a millisecond.

The Audi also has its quattro system intact under the body, and that means that it has superior traction compared to, let’s say, rear-wheel drive alternatives. Maybe that was the idea behind the making of the following video, even though we can’t be completely sure.

All we know is that this thing can seemingly double as a snow plow at the same time, judging by the video he just posted online. Apparently, it’s all done in the hopes of gathering more interest for the upcoming Gumball 3000 rally that is bound to kick off on May 23rd. We just can’t wait to see how this mad Audi will do. 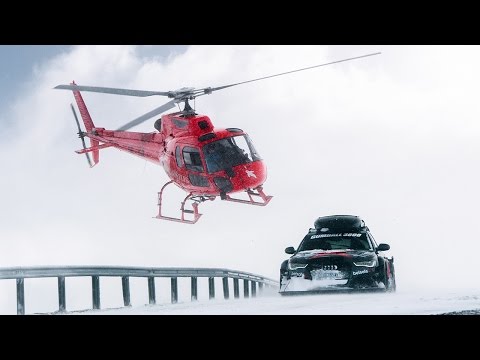