Jon Olsson, a professional skier and world-renowned car enthusiast, has just received delivery of this customized Rolls-Royce Phantom EWB that has just returned after it was tuned by Mansory. Jon waited for the vehicle to be ready for almost a year, which included having the car wait in customs for a couple of months.
13 photos

The extended wheelbase Phantom is painted in two tones of black all around, and it also has black wheels. The top is finished satin black, while the rest of the body has a shiny black finish. There is no Rolls-Royce coachline here, but you can spot plenty of carbon fiber elements made by Mansory.

As Olsson explains, the Mansory kit cannot be seen right away, but then it gets spotted in a discreet manner, which feels like a "nice balance" from his point of view. An understated styling kit may sound pointless for many, but it does make sense if you decide on customizing the exterior of a Rolls-Royce Phantom EWB.

Naturally, even the windows are tinted black, and the custom wheels that you see in the video and the photo gallery were designed according to Olsson's specifications. We are referring to a set of Brixton JO02, which are forged wheels that were customized to look like a modern interpretation of the wheel design seen on the 2004 Rolls-Royce Phantom.

The lights, exhausts, and all the elements that would have normally been shiny have been blacked out. The result is a car with a menacing look, and it may be the first Spirit of Ecstasy that we see painted. The Rolls-Royce badge on the front grille was not painted, though.

Olsson also resisted the urge to "slam" the vehicle, which would have implied installing the biggest possible wheels and lowering the suspension. As the famous influencer with 11 Winter X-Games podiums to his credit noted, lowering the Phantom would have diminished its presence.

On the inside, there are plenty of custom touches as well, but we will let Jon himself walk you through them in the video below. We think it does make an interesting choice for a family car.

Having been fortunate enough to test drive several Rolls-Royce vehicles, I can say that it will be tricky to go under the radar with this car, even without the chrome trim painted black and with black wheels and an all-black body. 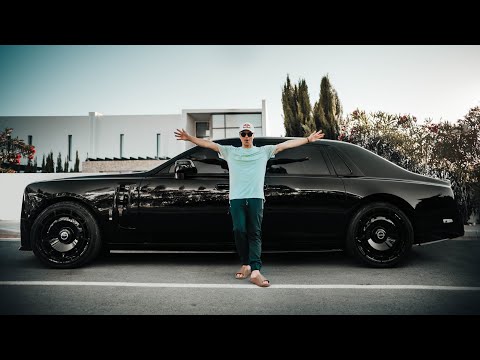