4 Rimac Nevera Is Faster, More Powerful Than Your Dream Car – And That Says It All

5 Rimac Nevera Driver Does 144 MPH During Public Event, Turns Himself In After
Up Next

Home > News > Car Profile
Vlad Mitrache
Watching Tim Burton, aka Shmee150, stroll around the hypercars gathered at this year's Goodwood Festival of Speed like it were his own backyard gives you an idea of just how used he is to be so close to these automotive unicorns.
8 photos

Well, that makes his reaction to getting to ride in the all-new Rimac Nevera all the more remarkable. He's obviously very excited about the opportunity, and why shouldn't he be? The only thing keeping the Nevera from the title of "quickest production car in the world" is the fact it's not technically a production car yet.

It is, however, "production-ready", which means that what you see is what the 150 future owners (the electric hypercar is understandably sold out) who have already paid for one are going to get when their turn comes. Rimac has a very good excuse if that takes a bit longer than originally predicted: it's been keeping itself busy acquiring the VW-owned French brand of Bugatti, together with Porsche.

Anyway, the specs of the Nevera are worth waiting an eternity for. The Croatian electric hypercar is said to reach 62 mph (100 kph) in under two seconds, and 186 mph (300 kph) in 9.3 seconds. The quarter mile should be dispatched in the mid-eights, which has already been proven, and on a regular, unprepped surface to boot.

There are plenty of reasons to get excited about getting the opportunity to ride in the Nevera, and just as the driver swipes through the various screens on the infotainment system, we spot a few more: the max G value generated at launch reads "4.4g", while the 0-max speed (255 mph / 410 kph, in this case) reads 10.55 seconds. That last one could be a mistake of sorts because there's no way the Nevera will go from 186 mph to 255 mph in just 1.25 seconds. Anyway, that particular screen shows somebody's been having fun with this car.

And, if anything, Shmee's run up the Goodwood Hill Climb confirms it. On the way to the start line, they pass an impressive line of rare, expensive, exotic, and really capable machines. However, the one Shmee was in was actually the quickest of them all. That must have felt pretty special.

Approaching the start, the driver puts the Nevera into Drift mode and, instead of doing a burnout to warm the tires up, he does a 360-degree spin on the spot. That's a good start. He leaves the car in Drift Mode for the first couple of turns as well, which means the EV takes them sideways.

He then switches to a more suited Track Mode, and the difference is immense. The Nevera is completely transformed into a track tool that grips in the corners and blasts its way out of them. Based on what we can see, Bugatti seems to be in safe hands.

After the experience, Shmee is literally lost for words. Even he admits it. He keeps starting sentences but midway through, he just pauses and finishes them with "it's so fast". Well, that may not be the most elaborate description, but we suspect the guys at Rimac would be pretty happy if those were the words that came to everyone's mind whenever the name was mentioned. 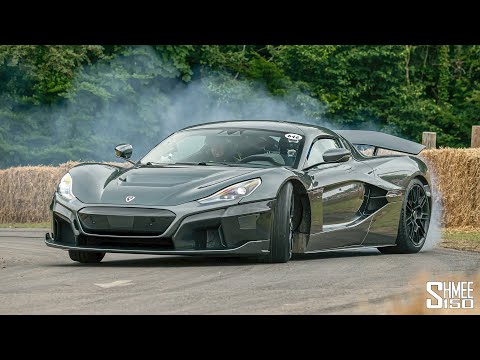