1 Stewart Returns to Winning at Kansas

Johnson Wins at Fontana, Grabs Lead in the Chase 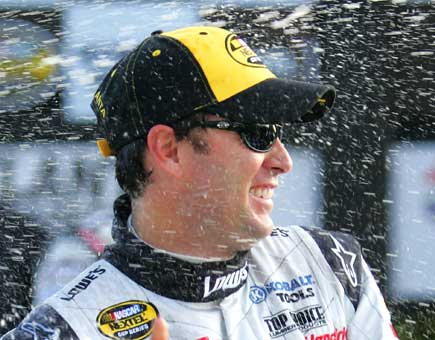 The 2009 Sprint Cup Chase promises to be a great one, as there are no less than 5 drivers now entitled to hope at the NASCAR trophy this year. Jimmie Johnson played his cards right and scored his 5th win of the season on Sunday, taking the chequered flag at Fontana ahead of teammate and title rival Jeff Gordon.

And it's not like the win – his 45th in career – was not predicted by Johnson's rivals. No sooner than last week, Colombian driver Juan Montoya admitted that Fontana will be a place where Johnson would hold the upper hand, and the Hendrick Motorsports driver delivered in style. However, despite leading the field for the majority of the 500 miles on schedule, the Californian had to survive a late surge from Gordon to walk away with his deserved win.

While passed by Gordon after the penultimate restart, Johnson quickly regained control of the race before the last caution of the day. He built enough lead up front to stay calm in the remaining 4 laps of the race, while the battle for second included Gordon, Montoya and championship leader Mark Martin.

In the end, it was Gordon who managed to beat his rivals to the finish line, while Montoya had to settle for another impressive – yet a bit disappointing - 3rd place. Mark Martin crossed the finish line in 4th place, therefore losing his lead in the overall classification. The Top 5 was completed by Tony Stewart, who's finally showing some regular-season magic in the Chase.

Stewart received a speeding penalty – under green flag – earlier in the race which demoted him to the rear of the field. Despite being a lap down, he managed to recover well in the second part of the race and save what could have been a disastrous day for him in Fontana.

“That's awesome. That's what we wanted. Keep chipping away at it but obviously there's a lot of racing left. We're in good shape. It is such a long race and so much takes place. I knew on pit road that you win some and lose some. Just a solid day all along,” said Johnson in the Victory Lane.

The Hendrick Motorsport driver is now leading the Chase by 12 points to Martin, while Montoya is still in 3rd place, 58 points down to the leader. Gordon's second consecutive runner-up spot lifted him all the way into 5th place overall, 21 points behind 4th placed Tony Stewart.