1 Jeep Is Back in Jurassic World: 4xe Tech Is “So Quiet It Won’t Disturb the Dinosaurs”

4 Movie Barbie Will Drive an Electric Chevrolet Corvette, and It Will Be Fabulously Pink

5 Five Cars Made Popular by Movies
Car video reviews:
Up Next

This could be the ultimate ride for the ultimate Johnny Depp fan: the picture bike from the 1990 classic Cry-Baby, which catapulted Depp to international heartthrob status, is about to cross the auction block. The timing can’t be a coincidence.
13 photos

Just days after the publicly-streamed lawsuit between Depp and his former wife Amber Heard ended with a ruling in his favor, Kruse GWS Auctions is announcing the upcoming sale of a very important piece of Depp-related memorabilia. It’s a 1955 Harley-Davidson Model K, the picture bike used for principal photography in the movie Cry-Baby. The motorcycle doesn’t come out of Depp’s personal collection, but it’s the closest thing.

According to the auction house, only two bikes were used during the production of the film: a mock-up that was used for the crash and burn scene at the end, and the picture bike that is now offered for sale. The latter was fully functional at the time of the shoot and was ridden by Depp himself, both in the Maryland and the Los Angeles set. You can see it in action in the video below.

At the end of the production, the bike was acquired by one of the secondary cast members and has changed hands several times over the years. As of late, it’s been sitting on display in a Missouri museum and has been shown at the Philadelphia Auto Show.

Post-production modifications include replacing the tachymeter with an odo, and the addition of a chain guard, but the listing notes that “running condition is unknown.” Still, “the bike is in fantastic, screen used condition, […] has all of the parts and should run and drive.” The promise of it being road-worthy doesn’t include the guarantee it will make all the girls swoon.

Bidding opens on June 25 and starts at $250,000, with $25,000 increments in between bids. Even if this bike hadn’t been sat in by Depp, it would have still fetched good money: the K series is the precursor of the Sportster, originally introduced in 1962 with a 750cc side-valve engine and offered only until 1956. It’s a rare gem, with the added appeal of A-list ownership. 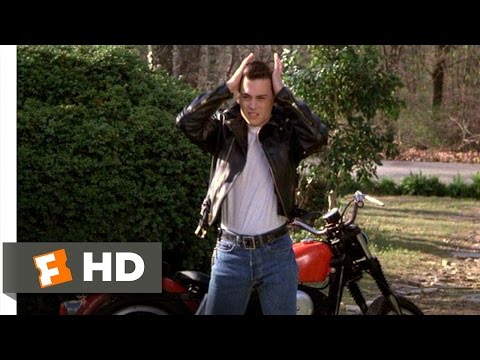