2 "For the Love of Liberty" Documentary Supported by Ford

3 Brad Pitt Helped by Paparazzo in Motorcycle Breakdown
Car video reviews:
Up Next 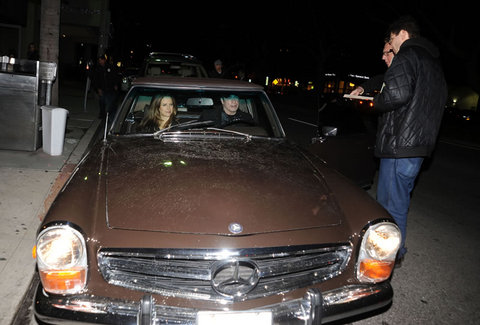 Some people have taste when it comes to cars and some people put 22-inch spinners on a their Escalade. We think Hollywood star John Travolta definitely falls in the first category. The A-lister was recently spotted with his wife Kelly Preston leaving dinner in a very unique 1965 Mercedes 230SL Roadster.

The car looks to be in pristine condition, maintaining its factory charm and appearance. These photos definitely don’t do any justice to the Bronze-brown metallic paint job it sports. The color looks truly excellent in combination with the dark beige leather interior.

The SL-Class 230SL was a new design in 1965, featuring a 2.3-liter six-cylinder engine, curved greenhouse windows and a distinctive roofline that earned it the nickname “pagoda top”. The engine delivers 150 horsepower to the rear wheels through a 4-speed automatic transmission.

All W113-model automobiles were produced between 1963 through 1971 and are becoming increasingly collectible in the US as they are equipped with independent rear suspension, a feature that improves handling. Most of these early SLs were sold with both the removable hard top and a soft top in the so-called Coupe/Roadster configuration, but there was also a California Coupe variant that came with the removable hardtop but no soft top.

Around 1967, the engine received a displacement increase and the model became known as the 250SL. Just a year later, the engine displacement was increased for the final time and the model designation became 280SL. Beginning with later versions of the 250SL, changes were made to the dashboard padding, switches and knobs, door pockets (US models only) and steering wheel.