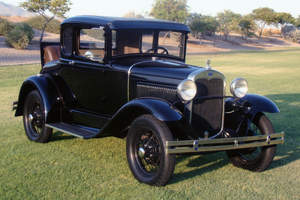 The 1930 Ford Model A used by the infamous gangster John Dillinger to escape the police and later driven by Johnny Depp in the “Public Enemies” blockbuster movie about the outlaw’s life, is being sold during the 39th Annual Barrett-Jackson Collector Car Auction in Scottsdale.

If you’re a 1930s gangster enthusiast with a gangster’s wallet and you want the car, you’ll have to hurry, as the auction started yesterday.

One of Dillinger’s greatest escapes happened in Wisconsin in 1934, and this Ford was the one that carried Dillinger and two of his lieutenants to safety. The robbers stole this car from its owner Robert Johnson. After the escape, the car was abandoned and later impounded by the Police - the vehicle was shot at and was blood stained. It was identified as “1930 Ford coupe, 4 cylinder, Model A, Wisconsin license #92652, Motor #2980001.” Eventually, the car was returned to Johnson, who decided that it was too damaged to be repaired and parked it for almost twenty years.

“The Model A was eventually returned to Johnson who determined that it wasn’t worth repairing and parked it for nearly three decades,” noted Steve Davis, president of Barrett-Jackson. “The car ended up in the barn of Alfred Love’s mother in-law, where Johnson rented a bungalow. Love bought it from Johnson and eventually passed it to his son, Mark, the current owner,”

The vehicle was given a throughout restoration in 2007 for its appearance in “Public Enemies”. The car comes with a complete documentation including its transfer paperwork, articles books, before-restoration photographs and copies of some federal files.

Don’t worry, the original bullet holes and dimples under the body have been perfectly preserved. Going once, going twice....