The Lohr Fardier FL500 is a rugged all-terrain 4-wheel drive vehicle designed and built by Lohr Industrie in the seventies for the French armed forces. Due to its lightweight, compact size, it was meant to be used by airborne troops, as they could be parachuted to the front line to resupply ammunition.

A large French Air Force cargo plane could carry no less than six such vehicles, and even helicopters could transport two of them. The word “fardier” in the vehicle’s name means a small wagon designed to transport heavy cargo, and this is specifically what it was built for - to carry a load of 480 kg (1,058 lbs) or tow 500 kg (1,100 lbs). It was also used to transport wounded soldiers to mobile hospitals.

Lohr’s strong points that made it a good fit for the military were its clever layout, incredible off-road performance, and low cost due to the use of various Citroen components. It was built around a sturdy tubular frame and took power from a Citroen AK2 Mehari engine mounted amidship. The 4x4 configuration, combined with the 2CV suspension, allows the FL500 to ford two feet of water and climb 50-degree slopes.

A 1976 example of the Lohr Fardier 4×4 somehow got into the hands of John DeLorean. While DeLorean’s most famous project was the DeLorean DMC-12, which starred in Back to the Future as a time machine, the brilliant engineer also worked on various other vehicles. One of them was the DMC-44, a project that never got to see the light of day.

While working on this particular project, which he intended as a lightweight 4x4 vehicle for industrial and agricultural applications, DeLorean bought this 1976 Lohr Fardier FL500 to use as inspiration and study its feasibility. That’s because the vehicle he and his team intended to build was very similar to the Lohr.

The FL 500 in question is now up for sale on eBay, and the listing says DeLorean likely bought it as military surplus from the French Foreign Legion. Backing that assumption is the FFLA livery and paint colors found during the vehicle’s restoration.

DeLorean’s Lohr Fardier was not only used for testing purposes but also featured in some promotional material for his team’s DMC-44 (you can watch a short YouTube video of those promo clips below).

After completing its mission at DeLorean Motor Company’s headquarters in California, the FL500 spent some time at the Lamington Farms Estate in Bedminster, New Jersey, where it also performed some light work duties.

Oldwick Garage in New Jersey was commissioned to perform repairs on the ex-military vehicle, and John DeLorean’s passing led to the garage taking ownership in lieu of payment.

After the current owner bought it in 2018, the vehicle went through a full restoration with all OEM and new parts, which brought it to an almost as-new condition. The mini rig rides on tan steel wheels wrapped in 205/70R15 off-road tires.

The no-frills exterior design of the Lohr Fardier is basic and utilitarian, and this particular unit offered on eBay is presented with a Desert Tan coat of paint applied over its steel tubular body. The vehicle’s 2-cylinder air-cooled gas engine is able to produce 29 hp (29.4 ps) and reach a top speed of 40 miles per hour (64.4 kph).

The “interior,” if we can call it so considering the Lohr has no doors, no roof, and no glass, is also as simple as it gets. The driver maneuvers the vehicle from a simple yet functional tan vinyl bucket seat positioned in the left front corner. A nearly vertical steering wheel, the dash, the all-black shifter, and twin parking brake handles complete the package. There is also a simple roll bar meant to protect the driver.

Finally, the roomy diamond plate deck is perfect for hauling anything you need.

This interesting piece of engineering and worthy contender for the title of “weird and wonderful” is offered for sale out of Morgantown, Pennsylvania, with a Buy It Now price of $28,900. 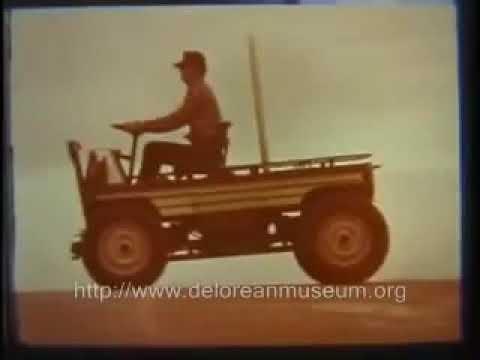