1 Lexus LFA Revs Up for the Nurburgring 24 Hours Race 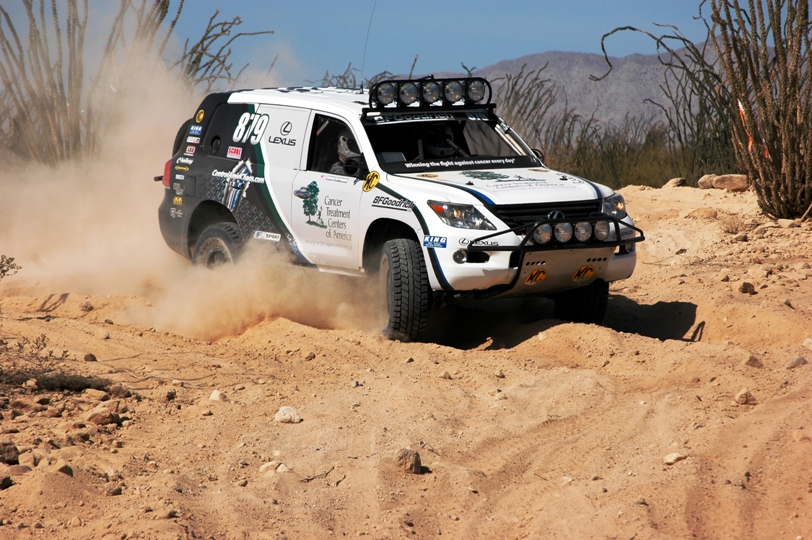 Lexus has proudly announced that Joe Bacal and his Cancer Treatment Centers of America Lexus LX 570 took its second Stock Full class victory in as many races on Sunday at the 24th Annual MasterCraft Safety Tecate SCORE San Felipe 250 in Mexico. Despite drawing the last starting place in the Stock Full class, Bacal managed to catch the 2009 class champion Justin Matney early in the race.

“Justin and I had a great back-and-forth run for several miles before I took over at about mile 55, but I didn’t see him again after that,” said Bacal, a Hodgkin’s lymphoma survivor who also uses his racing to inspire other cancer patients.

Though the San Felipe 250 course was rough, Bacal and its Lexus managed to run trouble free. At one point he and his co-driver Bob Ditner even stopped to help a stuck Class 7 racer. “The guy was in sand up to his axles, so Bob and I yanked him out quick with a tow strap. I think he went on to finish second in his class.”

The driver said that his success is attributed to the careful vehicle preparation and the durability of his Lexus. “The LX is getting faster and easier to drive with every race which gives me confidence to push harder,” noted Bacal. “I’ve also done a lot of prep work recently and it has a similar effect on confidence. The Long Beach Racers deserve credit, too, for their outstanding race support work.”

After this success, Joe Bacal and his JTGrey team look forward to their next race at the SCORE Baja 500 on June 4-6 when they return to defend their 2009 title.