1 Weirdly Awesome Camper Van Is Small Outside, Packs a Whole World Inside

4 VW Crafter-Based Campervan Is a Gorgeous, Off-Grid Resort Designed to Heal Your Soul

5 Guy Gets Creative With a Ford Transit Connect, Turns It Into a Budget-Friendly Camper Van
Car video reviews:
Coverstory

She’s from the Netherlands, he’s from the U.S., they met in Thailand and they’ve been living the dream for the last couple of years, traveling the world in their homemade camper van. They built it themselves, converting a Ford Transit into one cozy home-on-wheels with a hidden shower and a rear “garage.”
20 photos

Jetti is based on a 23 ft (7 m)- long 2018 Ford Transit cargo van that the couple bought for $36,000. They poured an extra $22,000 into the materials, which brings their van conversion to a total cost of $58,000. Nate and Maud built the camper van themselves in approximately three months.

There are three solar panels installed on the roof of Jetti, providing a total of 525W of solar power, there’s a 30-gallon fresh water tank and 300 Ah of electrical lithium-ion batteries, all stored in the rear garage of the van, which can also be accessed from inside the vehicle.

Jetti may be just a Ford Transit at origin, but it is now more spacious than you'd imagine, because Nate and Maud organized everything in a very clever way, making use of every single inch of space they had at their disposal. The rear doors of the van are equipped with lots of pockets and are used as storage space for their shoes and other basic items. They also strapped lots of things to the bottom of the bed.

The inside of the camper van exudes peacefulness and cleanliness, with the dominant color throughout being white. Jetti’s got a clean, Scandinavian-like design and the couple used a lot of wood accents: for the furniture, ceiling, the large kitchen countertop, and the floor.

Jetti’s kitchen area is equipped with a deep sink, a two-burner stove, a Lagun table, plenty of upper cabinets, drawers, and a Dometic fridge with a freezer compartment. One pleasant surprise of the Ford camper van is that it comes with a foldable shower and a toilet, which are hidden in the countertop.

The Jetti doesn’t have an air conditioner, but there’s a ceiling fan and two side windows in the rear of the van, which according to the owners, are more than enough to successfully get them through the hot days.

There’s a large, comfortable bed in the back of the van, from where you can watch the outside view through the side windows. And to make everything more entertaining, Jetti also has its own improvised cinema. The two bought a projector and installed a screen so they can chill and watch movies from the “bedroom”.

You can take a virtual tour of the Jetti camper van in the videos below. 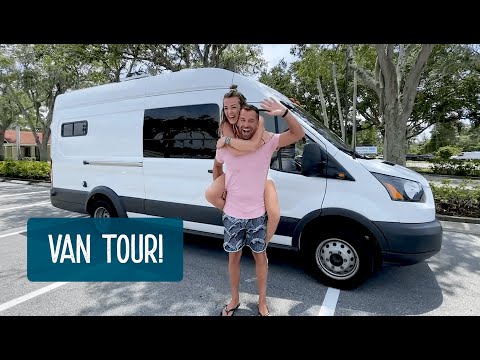 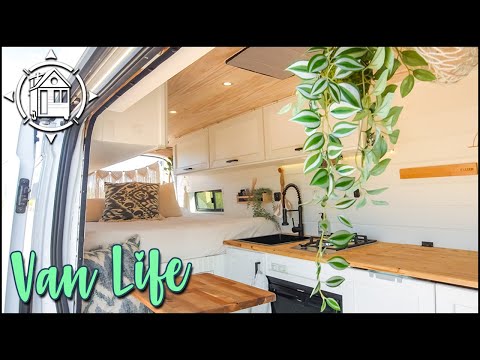