2 Jetson One, the Electric Flying Car of Tomorrow Delivered Today

We, humans, have wanted to fly since the beginning of our existence, so much so, that we didn’t stop until we made it happen. And now that we have finally unlocked the skies, we have one more goal to achieve, and that is to make flight accessible to everyone, so that anyone who wants can own their personal aircraft just like they do a regular car. That’s exactly what Jetson Aero promises to deliver with its Jetson ONE eVTOL (electric vertical take-off and landing) aircraft.
6 photos

The Swedish manufacturer has been working on its personal electric aerial vehicle since 2017 and it’s finally getting close to delivering the first units to its customers. Jetson first made the headlines in 2021, when it released a video of a pre-production prototype of its ONE aircraft flying in the woods. Since then, videos have kept on coming, with the manufacturer constantly teasing its flying car.

It’s been less than a month since Jetson released a video of the jet flying over the amazing lands of Tuscany, Italy, and now it’s back with fresh footage of the ONE eVTOL, intended to remind us that the company is working hard to bring its flying car to market as soon as possible.

And to make everything epic, the video's description includes an inspiring quote from Wilbur Wright, the American aviation pioneer who invented and successfully flew the world's first motor-operated airplane.

The Jetson ONE has gained massive popularity, with the entire 2022 production being already sold out, even though we're still waiting for the first units to be rolled out. The units available for 2023 are almost gone, too, with only a few spots left to reserve. What makes this particular eVTOL so appealing is the fact that its manufacturer promises that anyone will be able to own and fly one after just five minutes in the training room. On a side note, those who were lucky and deep-pocketed enough to order one of the units available for this year will also receive two days of training from Jetson Aero.

This jet ski of the sky as Jetson likes to call its one-passenger personal aircraft is made of aluminum and carbon fiber and its space airframe has a race car-inspired design. The eVTOL is powered by eight electric motors, with its software limiting the ONE to a top speed of 63 mph (102 kph). Jetson’s flying car offers a flight time of 20 minutes per charge.

You can find all the tech specs of the Jetson ONE on the manufacturer’s website, where you can also reserve one of the left units for 2023, if you can afford to spare $92,000, that is. 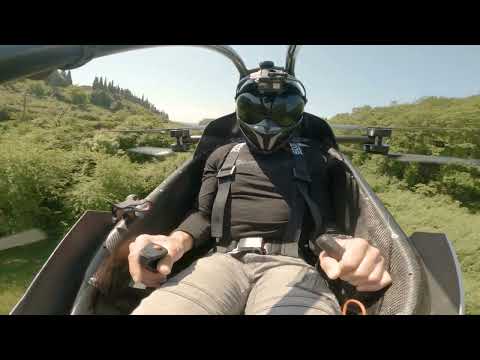