2 The ZUV Tricycle Is Quite Ugly, but It Still Puts Your e-Bike to Shame

4 Engineer Is Building Jet-Powered Go Kart in His Back Yard, Hopes for 140 MPH

5 Guy Martin Attempts Another Record, This Time In Air
Car video reviews:
Up Next

Jet Bike Races Ducati Streetfighter V4, You Can Guess Where This Is Going

A month ago, we covered an interesting creation, in the form of a jet-powered bicycle. Well, a month later, the rider of that bicycle is back with yet another video on YouTube. This time, he managed to get a road closed and started drag racing his jet-powered bicycle with a few of his friends.
10 photos

One of his friends raced him on a maxi-scooter, while another showed up at the meet with a Ducati Streetfighter V4, which is based on the Panigale. Now, this is where it gets interesting. Can a man from Taiwan build a jet-powered bicycle that is just as fast as a 208-horsepower motorcycle?

Well, we do not have the heart to say that it cannot be done. The man from Taiwan, named Wang Nan, is clearly ambitious, so we do not want to stop him in his tracks. He is the one who built a jet-powered bicycle, but it is just not as fast as a Ducati Streetfighter V4 in a straight line.

While not winning the drag race against the Italian motorcycle and not managing to beat a maxi-scooter to a respectable speed, we should not disrespect the builder. Going from motorized bicycles to motorcycles took years back in the early 20th century, and today's motorized two-wheeled creations have decades of development behind them.

Meanwhile, a man from Taiwan just fitted a jet engine to a bicycle and made something that is cool because it just turns childhood dreams into reality. It may not be the fastest thing on two wheels in the world, it burns a kilogram (2.2 lbs.) of kerosene per minute, but it follows the "built-not-bought" idea, which makes it special.

So, with that in mind, should you fit a $6,000 jet engine on a bicycle? Well, if you need to ask yourself that question, the answer is no. Because Wang Nan from Taiwan did not ask himself such questions and just went ahead with his project with the help of friends who are engineers, as well as a company that builds carbon fiber bicycle frames.

With all that behind us, check out the video below, as it might inspire you to live out your childhood dreams. Even if your dreams do not involve fitting a jet engine to a bicycle. 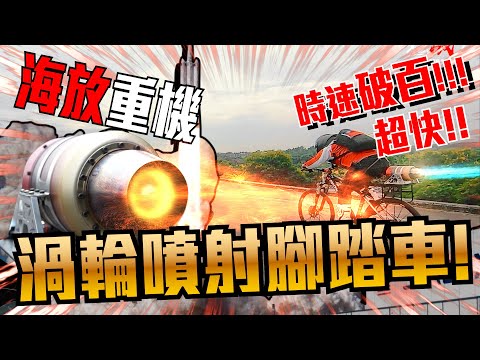