4 Blue Origin and SpaceX Fight to Build NASA's Moon Lander with 9 Others
Car video reviews:
Up Next

The Pros And Cons of the Dacia Spring, Europe's Cheapest EV

Despite being somewhat eclipsed by the exploits of rival SpaceX and possibly even Virgin Galactic in recent months, Jeff Bezos’ Blue Origin is now closer than ever to truly make space tourism a reality.
11 photos

It’s been a busy 2021 so far for the space company. It flew the 14th test mission of the New Shepard crew capsule back in January, with a test dummy inside, aptly called Mannequin Skywalker. Then, in early April, an astronaut rehearsal was performed with the same capsule.

On both occasions, the results were good enough for Blue Origin to announce this week that “it’s time, you can buy the very first seat on #NewShepard.”

That’s right, Blue Origin will officially open the reservation books for spaceflights. No details were announced on how the process is supposed to work or the cost of the tickets, but according to the company, all should be revealed on May 5.

Wearing the name of the first American to go to space, Alan Shepard, Blue Origin’s capsule is a reusable spacecraft that can carry to the edge of space six people at a time. People will board it, get strapped in, and will be able to listen to the countdown before the engines ignite.

Riding on top of a reusable rocket, the capsule will shoot up at Mach 3 and separate from the rocket just before it crosses the Karman line, the internationally recognized altitude where our planet ends, and space begins (100 km/62 miles).

Both pieces of the New Shepard, the rocket and the capsule, will then begin their controlled descent and land on different set locations on the ground. According to Blue Origin, the entire experience should last about 11 minutes and will not require any control to be exerted on the spacecraft by the tourists.

We’ll update this story once Blue Origin spills the beans on how to reserve a seat on the New Shepard. 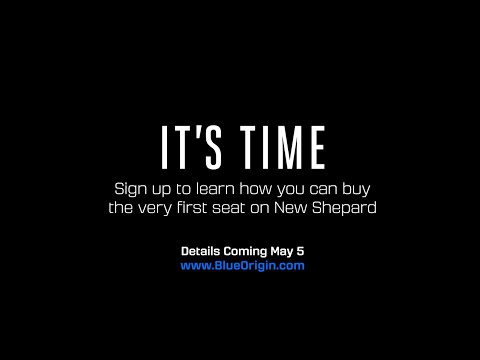