Right at the intersection of urban legend and cold hard facts is the latest build from luxury shipyard Oceanco, the mysterious and decidedly gorgeous Y721, or Project 721, presumably sold to none other than Amazon CEO Jeff Bezos in 2018.
10 photos

Late last week, following months of speculation on Bezos’ latest $500+-million toy and how he planned on getting a second superyacht to serve as shadow to this one, just so he could take a helicopter with him on cruises, the world got the first look at Y721. Urban legends aside, this is a spectacular build even if this sailing yacht doesn’t belong to Bezos (which is highly unlikely, given the strong industry buzz).

More photos and videos of the sailing superyacht have been published online, too, offering a better appreciation of the monster vessel. One video is also available at the bottom of the page, while Boat International has an entire gallery of truly gorgeous pictures.

Oceanco is keeping a very tight lid on the project, refusing to address the Bezos association in any way. The same media outlet notes that Y721 has left the shipyard on transport, on its way to fitting, so it won’t be long before we see the build in its final form. Y721 was built piece by piece at Oceanco’s Zwijnenburg facility and was assembled in Zwijndrecht, shrouded in secrecy. Delivery – to Bezos or whoever the lucky owner is – will take place in 2022, after sea trials.

Measuring 127 meters (417 feet), Y721 is believed to be based on the iconic Black Pearl, another Oceanco vessel (not Captain Sparrow’s ship in Pirates) and currently the world’s biggest DynaRig sailing yacht. Y721 also features a gleaming black hull with a bowsprit, spans several decks, and will have three masts for sailing. Once delivered, it will instantly set a few world records, including for the biggest sailing yacht in the world, the biggest vessel from the Oceanco shipyard, and the largest ship to ever come out of the Netherlands. 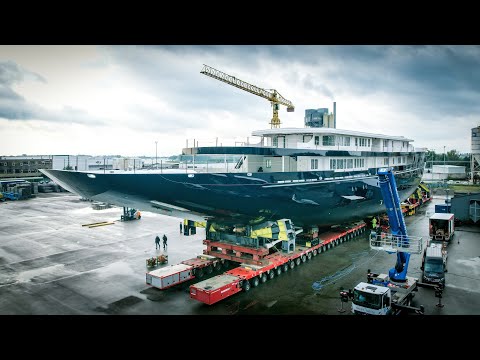