Vlad Mitrache
I honestly wish someone could have counted how many times a Hellcat V8 has been involved in a drag race because I have a strong feeling it would be one of the largest figures we've ever heard of. Not only is the 6.2-liter unit quite ubiquitous within the Stellantis performance range, but it also feels as though it was custom-built with this particular destination in mind.
10 photos

It's also hard to overstate just how successful this engine has been, and the best proof is the number and variety of models that host it under their hoods. You have your Chargers and Challengers, sure, but it didn't take Stellantis long to realize a big supercharged V8 could be a perfect match for other, slightly larger and less-readily associated with performance types of vehicles.

Take the Jeep Grand Cherokee Trackhawk for example - despite its acceleration, it's not the quickest SUV around, but it's definitely in the conversation. In a segment dominated by sleek German models with fancy aerodynamics and twin-turbo engines, the success of the brick-like Jeep can only come down to the brilliance of its engine.

However, if mid-sized SUVs aren't big enough for you, Stellantis has also slotted the supercharged 6.2-liter unit in a full-size pickup truck. Of course it has. As you know very well by now, it's called the RAM 1500 TRX and its 702 horsepower output makes it nothing short of wonderful.

Not enough? Enter Hennessey and its Mammoth conversion. This boosts the truck's power to 1,026 hp and 970 lb-ft (1,314 Nm), which is just as glorious as it is ridiculous. But if the engine is up for it, why not push the envelope?

These two cars are pretty much the apogee of what America has to offer. One is a stock SUV that can hold its own in a drag race against any vehicle of its type, while the other is a modified pickup truck with hypercar levels of power, all-wheel-drive, and off-road tires. Wait, what?

Yes, the Mammoth did not change its hiking boots for a pair of track shoes for this encounter, which raises a huge red flag right from the start over the relevance of this contest. We all know just how important traction is when trying to fly off the line and the bulky off-road tires are definitely going to be a big hindrance for the Hennessey machine.

It's not just the tires the converted RAM TRX will have to fight against, but also the inertia generated by the truck's massive weight. Coming in at roughly 7,000 lbs (3.2 tons), it's going to need all the power and torque the V8 is capable of if it's going to even hope of beating the much lighter Trackhawk (~5,300 lbs / 2.4 tons).

Predictably, with great help from the tires as well, the pickup fails to secure a win - or even come close, for that matter - in the standing quarter-mile run. Using the vehicle's launch control versus brake-boosting it proves to be quite irrelevant as the Jeep secures the win in both cases.

If you're familiar with the carwow format, you'll know it's now time for the brake test. Will the lighter car on road tires stop over a shorter distance than the much heavier one on off-road tires? I think we all know the answer to this one, so there's only one thing left to find out and that is the impact these shenanigans have had over the vehicle's mpg ratings.

Yes, I know, nobody cares about that and it's ridiculous to even consider - not to mention measured in a completely unprofessional and irrelevant manner - but aren't you at least a little bit curious, though? 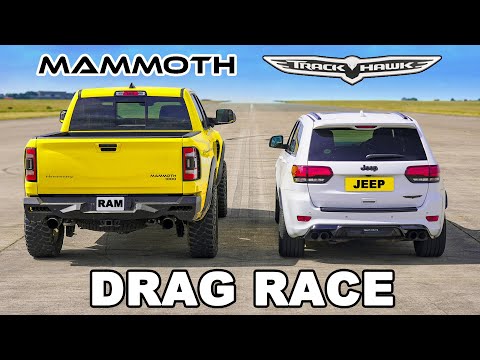