Two ultra-fast cars, made under the FCA umbrella, or Stellantis in the modern era, the Jeep Grand Cherokee Trackhawk and Dodge Challenger SRT Hellcat, met at the Orlando Speed World, apparently not long ago, for two quick races.
7 photos

That should be more than enough to reveal which one is quicker down the quarter-mile, and as it happens, one of them was significantly faster than the other. Can you guess the winner? Probably not, not without looking at the specs of both vehicles, so we'll start with the one that left production for good, namely the Jeep Grand Cherokee Trackhawk.

Capable of giving the Lamborghini Urus a headache, which it did on several occasions, the American super SUV has 707 hp and 645 lb-ft (875 Nm) of torque via the right pedal. Its supercharged 6.2-liter V8 engine rockets it to 62 mph (100 kph) in 3.5 seconds and all the way up to 180 mph (290 kph). On good tires, in perfect weather conditions, and with someone skilled enough holding the wheel, it is a 10-second car.

As for its two-door cousin from Dodge, it appears to be a Challenger SRT Hellcat Redeye Widebody. If that is indeed the case, then you are looking at even more output and thrust, rated at 797 hp and 707 lb-ft (959 Nm). It too rocks a supercharged 6.2-liter V8 under the hood, and it is about as fast as the high-riding Trackhawk. As far as its quarter-mile ability is concerned, around 10 seconds is what you should be looking for, with a perfect takeoff.

So, it appears that despite having different body styles, the two are quite equally matched. Thus, it all comes down to the drivers, and how skilled they are. This would be a good time to place a little bet, before scrolling down to the video to see which one came out on top. 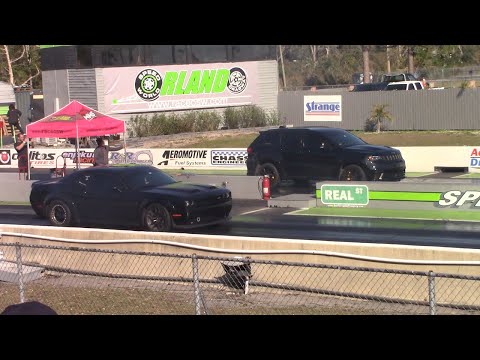