1 Ferrari Purosangue's Got a Big Mouth, Can Probably Trash Talk the Lamborghini Urus

Fat Tire Ultra Is Blix's Most Versatile E-Bike Yet, Boasts a Range of 80 Miles per Charge

Fighting luxury SUV heroes like Cadillac’s fifth-generation Escalade or the fourth-generation Lincoln Navigator has never been easy for Jeep. But it does have a bigger fighting chance now.
23 photos

Some may feel that Jeep now has a good opportunity to attack Caddy’s Escalade ESV supremacy. But others still think Jeep falls short with something. For Marouane Bembli, the virtual artist better known as TheSketchMonkey on social media, who is not exactly satisfied with the new versions of Jeep's flagship SUV, that would be their design.

According to the pixel master, the new iterations have a bit of “funky proportions” and to him, they feel just like the designers were doing a slack job of bringing to life a couple of “lifted vans.” So, the first part of his latest behind-the-scenes making-of video (embedded below) is dedicated to dissecting the styling, as well as to a quick proportion and atmosphere comparison (from 2:10) with the original SJ generation Wagoneer, as well as the regular, standard-wheelbase models.

Then, from the 6:15 mark, the CGI expert finally dives right into the proposed “RetroMod” transformation that will see the 2023 Jeep Grand Wagoneer L hark back to almost 60 years ago and establish a CGI bridge to 1963. Interestingly, this vision is not without logic. For example, some Jeep fans might feel saddened that even with four major versions in the family, the Wagoneer models still do not feel distinctive enough to potential buyers.

Maybe a design separation with Wagoneer and Wagoneer L keeping the modern appearance and the Grand Wagoneer plus Grand Wagoneer L taking up a retro stance might do wonders for this Jeep line’s sales... Especially now that people also must contend with dropping from traditional V8s to the new, Mexico-made twin-turbo Hurricane inline-six engines! 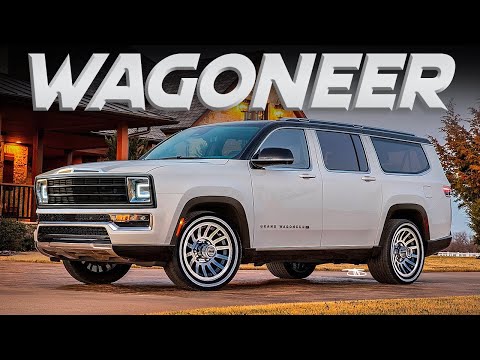