4 Millionaire Ice-T Relates to Every Driver’s Pain, Says He Was Robbed at the Gas Station

Jeep Compass vs Bus vs Angled Incline Is Not Offroading, Still Stupid Fun

Nothing ever disappears from the Internet, which is a thought that must give many pause, because of the stupid stunts they took part in and were filmed for posterity. The female driver of this Jeep Compass is among those.
7 photos

An older video of a hilarious (and hilariously stupid) incident in Brazil is picking up traction again online, after reemerging last month and being picked up on reddit last week. The video may be older, but it’s as funny as ever, and can always serve as a good lesson for any driver overestimating their skills at the wheel: just because you think you can doesn’t mean you should try.

The scene is a narrow mountain road in Brazil, with a bus stopped in the middle of it. The driver of the bus is nowhere to be seen, so a woman driving a Jeep Compass from the opposite direction is unable to pass it. Instead of waiting for him to return, she decides to try her hand at offroading. A Compass is good for all sorts of adventures on and off city streets, but driving it with two wheels on the side of a mountain, at 45 degrees, is not among them, as this driver got to find out.

Presumably itching to be on her way, the woman halfway climbs on the side of the mountain and tries to pass the bus. The roof of the Compass is touching the side of the bus, and that should have probably been her first clue that this wasn’t a good idea. As soon as she clears the bus, the Compass topples to the side and comes to a halt.

A second video shows the female driver and a passenger climb out, with assistance from others. They don’t seem hurt, but the driver appears shocked at what she just did. By everyone’s attire, including a woman in an all-white gown, this was probably a wedding party, and that would explain the rush. We all know weddings creates all types of crazy drama. Including the urgent desire to climb a mountain to pass a bus. 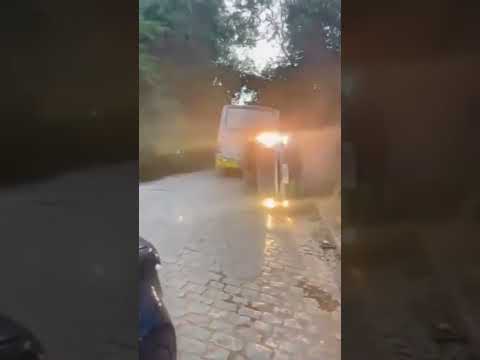 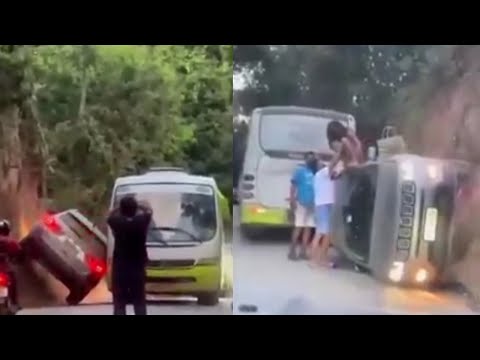