1 Audi RS 7 Coupe Imagined With Less Practicality, More Chicness - Does It Get Your Vote?

2 Ford Fusion Returns to Americas for a Third Stint, Albeit Only in Virtual Evos Form

3 Alpina Coupe-S Looks Like the Ultimate Trigger for Purists, We Hope It Comes True

While Jeep is eagerly giving away free Compass compact crossover SUVs alongside The Ellen Show, it turns out that Toyota has decided to consider the options of going against the 2022 Ford Maverick and Hyundai Santa Cruz. So, are they going to miss the hype train or not?
19 photos

The rumor mill has caught a logical wind of Toyota head honchos mulling the idea of following in the footsteps of the Santa Cruz and Maverick return to American compact truck segment glory with a compact-sized unibody truck of its own, perhaps based on the next RAV4. But, as it turns out, if Jeep weren’t preoccupied with freebies, maybe they would notice the obvious.

Stellantis, if the company ever considered the idea of duking it out with Hyundai and – above all – the ruling Ford in the pocket-size truck segment, already has the perfect candidate for a Santa Cruz and Maverick fighter. Well, at least virtually, as per the opinion of the pixel master better known as SRK Designs on social media, who has decided to play with a Jeep crossover and quickly turn it into a unibody compact truck.

Logically, the CGI starting point was the unsuspecting Compass nameplate, a model that dukes it out with the Ford Escape and Hyundai Tucson in the real world. Now, over across the virtual realm and following the latest behind-the-scenes making-of digital video feature, it also takes the form of a little pickup truck that would certainly give all Mavericks and Santa Cruzes a little bit of 4x4 headaches.

This is because while the Maverick ponders affordable and even sustainable custody over the resurrected U.S. compact pickup truck segment, and the Santa Cruz goes for a bit of posh attitude, the hypothetical Jeep Compass unibody utility vehicle seeks legendary 4x4 capabilities in virtual Trailhawk form. Unfortunately, this is all merely wishful thinking – at least for now. 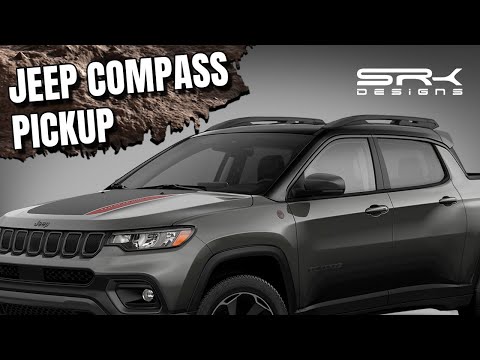