2 Electric vs ICE: Ken Block Tries Them Both

Redesigned on the Subaru Global Platform last year, the Levorg is a compact wagon that blurs the line between the Impreza hatch and Outback wagon. Until the STI Sport shows up in 2022 with the FA24, a 1.8-liter turbo that bears the CB18 codename will have to suffice.
12 photos

The CB is the fourth-generation boxer family developed by Subaru, a successor to the EA, EJ, and FB/FA series. What makes the Compact Boxer special over its forerunners, you ask? For starters, lean-burn combustion enables a thermal efficiency of 40 percent. It’s also worth mentioning the centerlines of the cylinder bores don’t intersect with the crankshaft axis. More specifically, an 8-mm offset reduces friction during the downstroke.

177 PS (175 horsepower) and 300 Nm (221 pound-feet) of torque are more than adequate for a compact car, but nevertheless, pixel wizard Theo Throttle gave the Levorg the 2.4-liter turbo from the WRX. The beefier engine is backed up by a lot of plastic for the front bumper, wheel arches, skirt extensions, and rear bumper, which is too much if you ask me. The WRX was met with criticism over the copious amount of cladding, and I still wonder if Subaru’s designers understand that plastic garnish just isn’t cool.

Similar to the 2022 model year WRX for the United States of America, the Japanese domestic market Levorg WRX rendering features a quad-piped exhaust, although the FA24 doesn’t sound particularly nice. In addition to being a four-cylinder affair, the force-fed boxer redlines at just over 6,000 revolutions per minute. My personal car, which boasts a far less potent four-cylinder engine, has a single pipe and shows 6,500 rpm on the tacho. My point is, styling just for styling’s sake is getting ridiculous on modern cars.

The Volkswagen Group is probably the worst offender due to fake exhaust tips, and the Bucky Beaver-like grille from BMW comes on a close second. 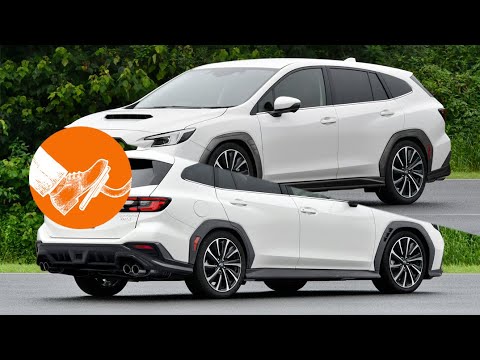