Jay Leno's Lawsuit – It's a Doozey! 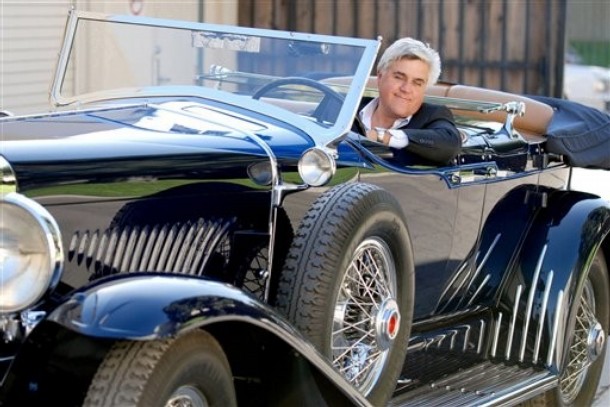 It's no mystery that “The Tonight Show”' host, that jolly guy with a great big chin, Jay Leno, is probably one of the biggest car enthusiasts out there and he's got the money to back it up too. His garage is probably one of the most expensive collections of cars and bikes in the world today, save maybe that of an Arabian oil tycoon.

He's been buying antique cars left and right for years, but it looks like that hobby is right now coming to bite him in the B-hind, as a fresh new lawsuit has just been tossed his way. It's about an antique town car, an American brand, the Duesenberg, the Model J from 1930 to be precise. These cars were very expensive even back in the day, particularly because there were very few rolling the streets.

The deal goes something like this: Leno purchased the car in an auction back in 2005. Except that the owner turns out to have taken it and another car, a 1930 Rolls Royce, actually belonging to a John Strauss who kept them in a garage on Windsor in Manhattan, New York. Since Strauss failed to pay $29,000 in parking fees to the garage, they decided to take the cars and auction them.

This was done without the owner's knowledge who is now saying the entire parking thing was a scam to sell the cars. The two automobiles had been kept in the specified location for 50 years until 2005. Strauss was suffering from dementia at the time and died this year, but the estate owners want to go settle the matter.

“Notwithstanding the hundreds of thousands of dollars paid by Strauss to the garage over the years, these vehicles were purportedly auctioned off to satisfy certain trivial parking bills” says the lawsuit. When contacted on the matter, Jay's rep declined to comment. It looks like the TV star will have one less classic ride in his garage if some people have their way.