1 You Won’t Be Getting the Cybertruck Hot Wheels for Christmas, After All

Jay Leno is a long-time Tesla supporter and friend of Elon Musk’s, but he’s also a man with experience when it comes to cars of all makes and models. You can count on his being objective when talking about the popular EV maker.
12 photos

As Tesla joined the S&P 500 index, becoming one of the highest-valued companies on the stock market, Jay Leno sat down for a chat with Shepard Smith on CNBC to discuss how the carmaker got there and what is it that sets Elon Musk apart from other CEOs. Leno calls Musk a genius for thinking of the larger picture when he started making all-electric vehicles.

As he puts it, the reason Tesla is so successful is that Musk left nothing to chance when it comes to customer experience. Many carmakers today still struggle with seeing the bigger picture, which Musk was able to do from day one and, why yes, it involved simultaneously building the infrastructure for the vehicles he was building.

“Even today, a lot of the major manufacturers build an electric car, but, oh, where do you charge it?” says. “Elon was smart, when he started, he knew this idea would work so he built charging stations.”

Unlike some media analysts and the often-ridiculed Tesla “haters” (“shorts,” as Musk himself calls them), Leno doesn’t believe the Tesla market valuation is a bubble that could pop at any moment. If anything, Tesla is poised for even more amazing accomplishments, if only for the reason that it has no real competitor right now.

“[European EVss] don’t have the range of the Tesla,” Leno explains. “They don’t, because Tesla leads the field. We seem to have this inferiority complex that somehow things in Europe are better than things built here. The fact that Elon can send a rocket into space and land it back on Earth for, what, a tenth of the price of the U.S. government? Well, that’s what private industry is supposed to do – cheaper, faster, more efficient.”

Leno brushes off the idea that the adoption of EVs stifles the joy of car ownership because there’s no sound coming from the motor and no gears to go through. For crowded urban environments, an electric vehicle is what makes sense the most, because you’re going to be spending most of the time stuck in traffic, either way. 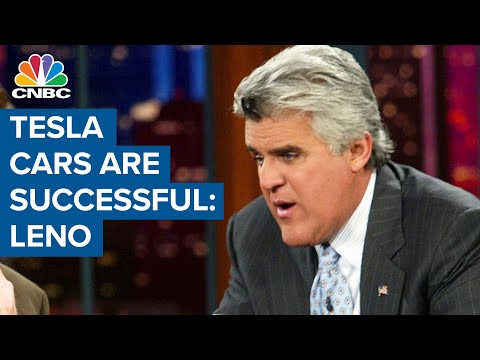 Editor's note: Pictured in the gallery, Elon Musk and Jay Leno go for a ride in the upcoming Tesla Cybertruck.