BMW Scramblers Based on the R nineT Are the Next Best Thing, and They'll Be Cheaper, Too

Home > News > Classics
Ionut Ungureanu
1 photo
Jay Leno’s Garage has always been about the cars that tell a story or whose story is something to tell of. The latest American breed the car collector has managed to put his hands on sure makes most of his previous experiences pale in comparison. If AMC’s AMX two-seater sportscar doesn't impress you, the story behind its owner sure will.
American Motors Corporation has its fair share of automotive history with the regular ups and downs, but back in the late ‘60s they were still up and running. It’s not just the model that makes this particular vehicle value a lot, but the story behind its owner. Dated 1968 it’s, in fact, the prize beautiful models received for being the Playboy Playmate of the Year. The custom color itself was named Playmate Pink.

Under the bonnet, there’s a classic 4.8-litter (290 cc) V8 running with an automatic transmission. The rest of the vehicle's specifics, we'll leave you to discover in the video below.

We do want to look closer at its great story. The idea of gifting Playboy models with new AMX cars apparently belongs to the ad agency AMC hired back then, Wells, Rich, Green, Inc. According to Hemmings, getting dealers enthused about AMC’s new sport cars was a task that fell to Guy Hadsall Jr. He was the one to invite the company’s new vehicles into Hugh Hefner’s Playboy clubs.

At the time, Playboy magazine had 19 related clubs around the world, so the marketing idea was quite clever. Angela Dorian, the 1968 Playmate of the Year, was, in fact, the owner of the car Jay Leno got to drive in the last episode of his show. The former Playboy model did what most of the prize winners eventually decided to, which was repainting their cars to avoid drawing attention.

She did keep the car up until 2010 when the current owner bought it from her. However, the AMX was in poor condition and needed a lot of restoration work. Other than the fact we are talking about a former Playboy model who is currently in prison for shooting her husband, you'll find there is a lot more of the story to discover. 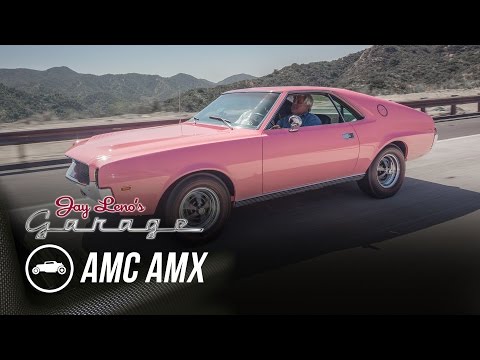