5 Jay Leno And Ian Callum Will Share a Jaguar XK 120 Roadster For 2014 Mille Miglia
Car video reviews:
Up Next

American television celebrity Jay Leno runs the famous 1956 Jaguar XKSS, once owned by 1970 Hollywood celebrity Steve McQueen, in the latest episode of “Jay Leno’s Garage”. Considered to be one of the most plain-spoken shows about cars around, Leno gets an nostalgic moment while he drives one of the 16 classics ever made and explains why he thinks it feels like meeting a movie star.
1 photo

The shows starts in Jay’s full-of one of a kind beauties garage, with the host presenting the classic race car driven by the “King of Cool”. The almost 60-years old Jaguar is now owned by the Petersen Museum, in Las Vegas, where car loves can see it every day of the week. Leno gets to drive the beauty after they’ve got the car on loan from the museum.

Unlike most of the car museums, Petersen is one of those ones that actually take the vehicles for a ride pretty frequent, driving them in tours and events around the country. Jay Leno has the marketing director of the institution, Chris Brown, invited at the show explaining about McQueen’s car collection. Besides the Jag, over 350 vehicles can be seen at the Los Angeles-based exhibition.

The author of the book “McQueen’s Machines”, Matt Stone, is also present at the latest episode of “Jay Leno’s Garage”. According to him, 1974’s highest-paid movie star in the world was a man with a wide variety of taste in cars and in motorcycles and a very capable racing driver.

Stone is guessing that the 3.4 litter engine classic now has a value of about $25 to $30 million (£14-17 million). “The original plan was to build about 25 of them and they ultimately did 16. The car was originally with a red interior and Steve had it done for these subtle colors. It was one of the fastest cars of the time”, explained the man who knows best about McQueen’s cars. A racing car on the street
Besides the fact it's a Jag once owned by one of the most famous actor in American film industry, the car itself is a beast meant to stay on the racing track, that somehow stem to a street vehicle and stayed that way.

And you can definitely hear that motor working his 250 horsepower while Leno is pushing the pedal. Besides being a beast for that edge, the XKSS is very light having most of the body made out of aluminium.

“Driving this car is like meeting a movie star. It sounds like Pavarotti”, Leno says while the wind flutters his hair. We are looking at an almost 60-years old sports car that is in a perfect shape and is still able to easily reach 180 mph (289 km/h). Now that is something. 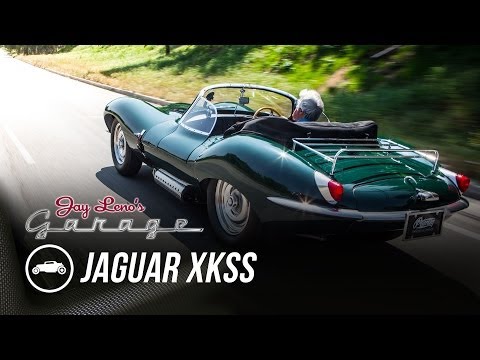